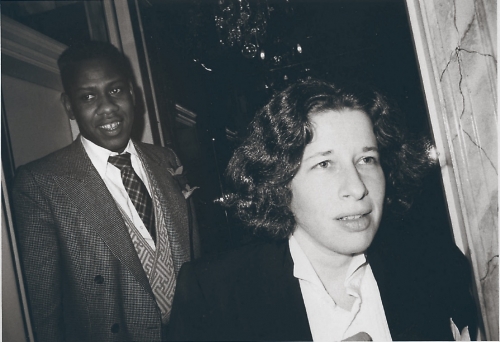 Cher kissing in the White House, Andy Warhol sleepy in his nightshirt: Bob Colacello, America’s social chronicler, met them all and photographed many. Long before paparazzi poisoned images.

Bob Colacello, 74, has already published a few photo books. He accompanies society as one of the glamorous, most well-networked New Yorker journalists. One of his generous beliefs has always been, never to jealously withhold one’s friends from others. It Just Happened (Ivorypress), is the title of his most recent coffee-table book, compiled during Lockdown from innumerable boxes that make up his imposing archive.

It is designed like a personal photo album, accompanied by the photographer’s handwritten notes about what was happening in and around the images. One photo shows singer Cher eating a maraschino cherry right out of Greg Allman’s mouth, to whom she was married to at the time – at a White House ceremony for the inauguration of President Jimmy Carter. All without any fear of exposure, because they felt secure in front of his little Minox pocket camera. This lightheartedness carries through to all of his images: they show society photography from a time before the yellow press’ malevolent paparazzi poisoned the images. Colacello photographed at eye level, he got really close without a telephoto lens because he was one of them. And how his photography celebrates life! A young Bianca Jagger in 1976 as she does “everyone-so-yeah” at a cocktail party hosted by the fashion designer Halston, and Fran Lebowitz, the wittiest of writers, as he notes in his book, barely 26, when he took that photo of her in 1976, the shirt and blazer look already her uniform in those days. She wrote a column for Andy Warhol’s celebrity magazine Interview, of which Colacello was editor-in-chief from 1971 to 1983. Artists such as Rauschenberg, Mapplethorpe, and Lichtenstein; musicians, models, heads of state – all of them are included in his book. Often at parties, really, um, well – crazy parties back then in the ‘70s and early ‘80s, when there weren’t all these boring bankers that frantically pushed the stock prices up with swollen jugular veins. A time when riches alone were not yet a ticket for entry or a social membership criteria. “One has to be original, creative, engaged”, as automotive heir Jean Pigozzi, also found in the book, once summarized. “But, at the same time, equanimous! Not like Brad Pitt these days, who immediately after greeting you launches into a huge lecture on Africa. Politicians don’t constantly talk about the film business, either!” It was with just this same nonchalance that Colacello captured his many encounters. It is almost a boon to look at his photos in a time when everyone prefers to mirror themselves and act out their selfie culture with their sugarcoated faces, sharing this with the whole world – a world that gets more and more shameless. Colacello shows moments without stealing their privacy. One doesn’t ever see him.

“I never saw myself as a photographer,” he said once. Symmetry, lighting, frame? Bob Cola, as he is lovingly called by some – also because these days the brown fizz is his party drink of choice after his years of excess – just pressed the release and let snapshots develop from every perspective. With that also came a new aesthetic identity within the photojournalistic genre of the seventies and eighties. The Ivorypress Publishing house, with its exhibition space and bookstore in Madrid, founded by Elena Foster, honors him with an accompanying exhibition. It can be visited upon prior notice. How would he illustrate the current times? “Good question!”, he emails from New York. “People in masks and winter coats who eat outside on empty streets in front of fancy restaurants like the Caravaggio or Marjorelle?”