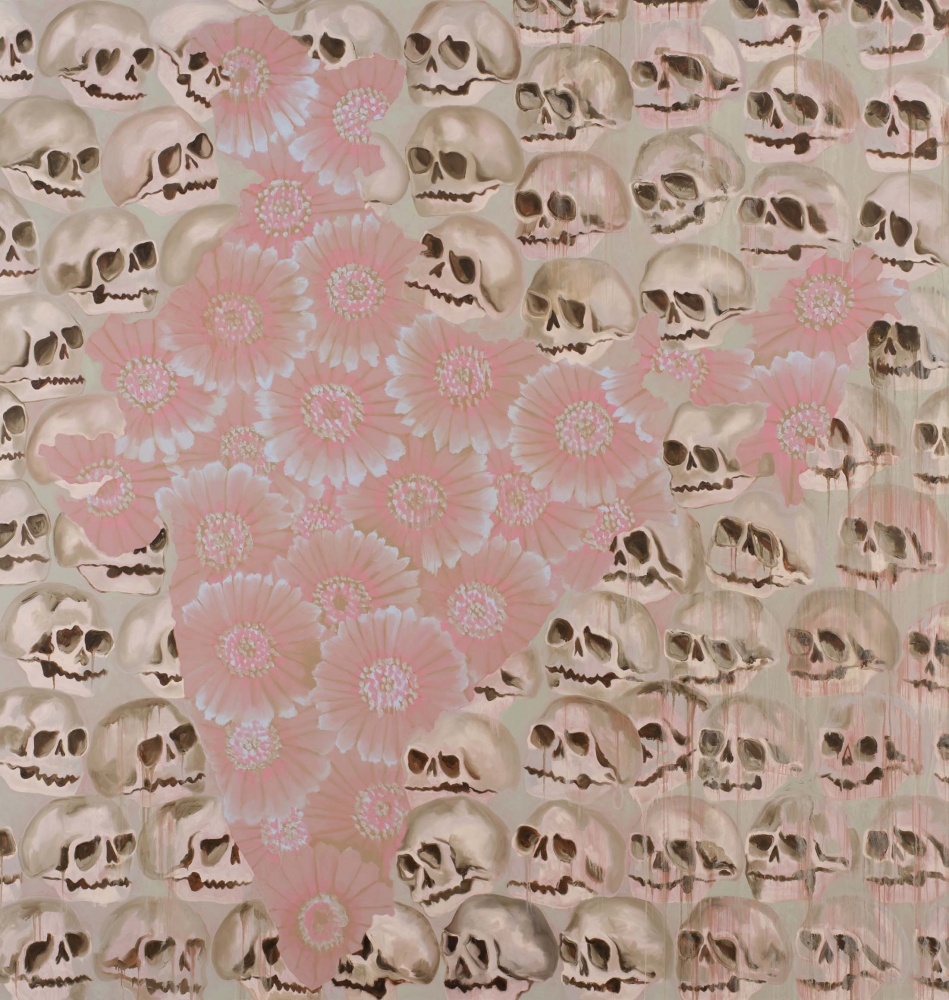 Flowers resembling marigolds form the ancient diamond shaped outline of a map of India, which marries with a background of dozens of skulls gazing at the map, all awash in soft pink.

Marigolds, or Calendula officinalis, are prevalent throughout India, where they are used to craft garlands that are offered to Hindu gods and goddesses. Skulls are prominent in Hindu and Buddhist artwork depicting deities, their relevance in eastern symbology dating back to the dawn of the Hindu civilization more than 5,000 years ago.

Profoundly inspired by the culture and traditions of India since his first visit to the South Asian country 48 years ago, Italian-born, New York-based artist Francesco Clemente’s newest paintings and frescoes lead the viewer on an enchanting voyage.

“This painting of marigolds, but these aren’t really marigolds, but flowers, are very important to me,” Clemente said at the opening Friday of Francesco Clemente: India at Vito Schnabel Projects, New York. “Forty years ago, I was with a shaman in Mexico, and an anthropologist inquired about the medicinal plants. The shaman said ‘you don’t understand, I only deal with two things: life and death.’”

India I (2019) is among four large oil on canvas paintings on view until January 18, 2020. The New York show overlaps with Francesco Clemente: Clouds, featuring six frescoes from the series Aspects of the Moon (2019) created in Rome, on display at Vito Schnabel Gallery, St. Moritz, Switzerland, from December 27, through February 2, 2020.

“Since he began making art more than four decades ago, Francesco has pioneered a very special kind of figuration that draws on the influences of history, literature, and ancient belief systems, as well as his global travels and personal study, to look at human experience as both a spiritual and sensual journey,” said Schnabel. “Whereas the public is very familiar with his smaller scale pastel works, which are universally appreciated and critically acclaimed, Francesco’s large-scale paintings are perhaps less familiar, less often seen. They show a master’s special ability to merge abstraction and figuration, color, and space.”

Clemente describes “the notion of India as a delusional concept, and India has a very exasperating and contradictory reality".

“My strategy is to move continuously in terms of the paint I use and mediums I use,” Clemente said. “All images submerge or go back in a new form.”

“All of my work comes from tiny scraps of paper where I draw the plan of what I intend to do, so I don’t forget,” he said. “But here, in India I, I actually traced the map because I wanted it to be accurate.”

Clemente plays with the contrast between New York, where he lives and works, and Chennai, formerly known as Madras, the capital of the Indian state of Tamil Nadu.

“I like to feel displaced, and I like to get out of my comfort zone,” he said.

Asked Friday if he returns often to Naples, Clemente quipped: “Naples is a full-time job. I am a failed Neapolitan because to be a Neapolitan is a full time job. Neapolitans are so witty and so skeptical.”

Still, Naples plays a prominent role in India II (2019), an imposing portrait of a woman inspired by the Neapolitan siren Parthenope but wearing a sari blended into a map of India and surrounded by stormy clouds.

His fascination with India began with his first visit to Madras (now Chennai) in 1971, where he embraced religious and folk traditions as well as traditional art and crafts. In 1976 and 1977, he immersed himself in religious texts at the library of the Theosophical Society of Madras. He studied Sanskrit, as well as Hindu and Buddhist literature, in India before making New York his primary studio and home in 1980.

Clemente is regarded as a key figure in the Italian Transavanguardia movement of the 1980s, rejecting Formalism and conceptual art in favor of a return to figurative art and Symbolism, and a leader of Neo-Expressionism in the United States. His work gained global attention in the 39th edition of Venice Biennale in 1980.

His impact on art and culture is as vast as his array of influences.

Clemente has collaborated with Andy Warhol and Jean-Michel Basquiat, while maintaining a strong interest in the writings of Allen Ginsberg, Robert Creeley, John Wieners, Rene Ricard, Vincent Katz, and Salman Rushdie. In 1986, he and American art critic and editor Raymond Foye co-founded the Hanuman Books series published until 1993 out of the Chelsea Hotel in New York. Now a cult sensation, the books highlight luminaries of Beat poetry, gay and trans culture, Warhol’s Factory, San Francisco’s North Beach and New York’s Lower East Side art scenes, the Naropa Institute, and contemporary music and film. His cross-cultural, time-bending art is featured in Great Expectations, a 1998 contemporary film adaptation of Charles Dickens’s 1861 novel of the same name.

Elected to the American Academy of Arts and Letters in 2010, Clemente’s work is part of global museum collections such as the Art Institute of Chicago; Miami Art Museum; Kunstmuseum Basel; Solomon R. Guggenheim Museum, Bilbao and New York; The Metropolitan Museum of Art, New York; The Museum of Modern Art, New York.

All four paintings on display in New York present maps of India. The map in India IV frames a moon, while seashells, fish, and a starfish adorn the inside and outside of the map’s outline in India III. Both simple images at first glance.

“When you look at most of my work you see something really gentle, but if you look again, the images are challenging and dark,” said Clemente