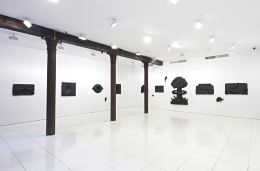 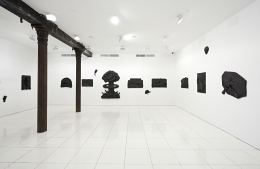 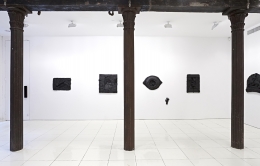 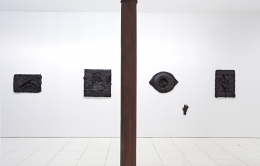 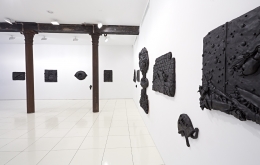 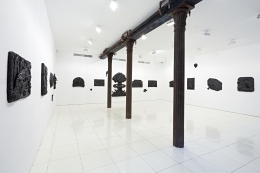 An exhibition of new work by Theo A. Rosenblum. Predator features a series of black monochrome sculptural reliefs that portray death in its many guises.

In this series, Rosenblum provides a comical and morbid glimpse into the moments just before, or immediately following death. The tombstone-like reliefs depict grim scenes: a small mouse tempted into a trap, the plume of a nuclear blast, a dark figure entering a doorway and a lobster selected from a tank. The mundane occasions of death are made monumental while the extraordinary are made tangible. Accompanying these works are scaled down reliefs of individual objects. Like evidence at a crime scene these smaller reliefs create a map that connects the narrative beyond each frame and across the exhibition walls.

Rosenblum utilizes cinematic timing to examine the different facets of death; the horror of slow demise and decay, the brutality of violent death, the routine versus ritualized death, and life sustaining death are all explorations into the ephemeral nature of life. Rosenblum’smemento mori show us that even in the modern world, where mankind seemingly resides at the top of the food chain, we all eventually fall prey to something.