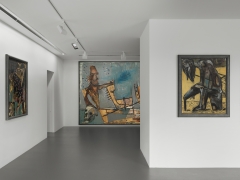 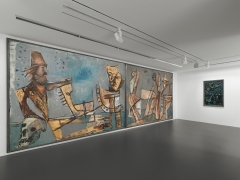 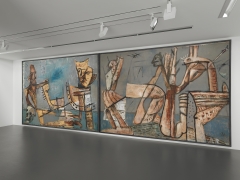 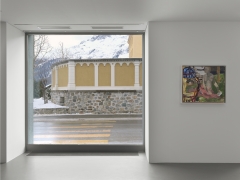 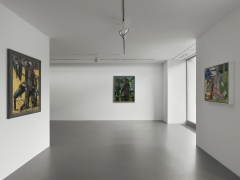 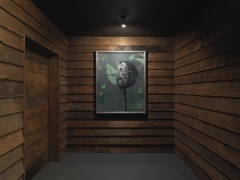 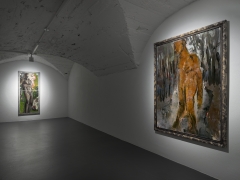 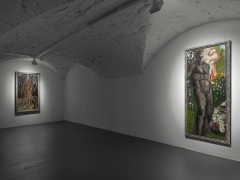 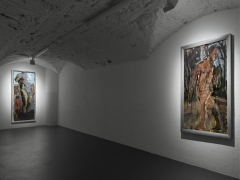 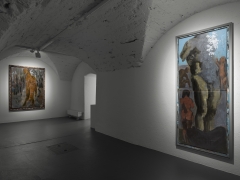 Markus Lüpertz has been extended through June 20, 2020.

Beginning February 7, 2020, Vito Schnabel Gallery is pleased to present its first solo exhibition with internationally celebrated German artist Markus Lüpertz. In a selection of eleven paintings made between the late 1980s and the present day, the artist engages themes rooted in the history of painting and the classical tradition. Rich with references to mythology, history, and legends, and replete with art historical allusions, Lüpertz’s work consistently defies expectations through his unconventional interpretations of familiar themes, and achieves drama through the exquisite tension he creates between figuration and abstraction.

Over the course of his five-decade career, Lüpertz has fused and fluidly reinterpreted conventional visual vocabularies. A deep knowledge of ancient and classical art forms is ever-present in his work, which draws upon the achievements of cultural titans of the distant past while engaging with his own nation’s more recent brutal and complex story. The evolution of Lüpertz’s artistic practice arises from a conversation with history. As Carolina Andrada Páez explains, his “entire oeuvre constitutes a dialogue which, in its own ongoing process, lights upon the themes and forms it then addresses and embodies.”1

The exhibition is organized with the cooperation of Michael Werner Gallery.

About the Exhibition
Markus Lüpertz emerged on the German art scene in the 1960s, as part of a generation of postwar artists that included peers such as Georg Baselitz, Jörg Immendorff, and A.R. Penck. After a short stint at the Kunstakademie Düsseldorf and a brief period in Paris, Lüpertz moved to West Berlin in 1962. There he began to grapple with a figurative approach to painting that railed against the prevailing styles of Abstract Expressionism, American Pop Art, and Conceptual variants that dominated aesthetic trends. Embracing a resurgent interest in historical, cultural, and mythological imagery, Lüpertz eschewed fashionable artistic tropes to freely pursue his own original approach to pictorial space.

Lüpertz’s early ‘Dithyrambic Paintings’ borrow from classical mythology and reference Friedrich Nietzsche’s Dionysian poetry. The term ‘dithyrambic’ describes a form of ancient Greek hymn performed in dedication to Dionysus, god of wine, vegetation, unbridled pleasure, festivity, and frenzy. For Lüpertz, the dithyrambic concept served as a correlative to his own impassioned celebration of the process of painting itself. This construct became fundamental to the artist’s aesthetic philosophy and fueled the evolution of his ideas about pictorial representation and abstract invention. For his ‘Dithyrambic Paintings’ from the 1960s and ‘70s, Lüpertz chose as his subjects such deceptively banal objects as tree trunks, wood shingles, tents, sheaves of wheat, and helmets, that allowed him to stress the painterly qualities he wanted to emphasize: flatness, volume, symmetry, and structure. With their restrained color palette and grand scale, these early paintings moved the artist toward his distinctive style: the rendering of familiar motifs with great expressiveness but a mysterious obscurity. Lüpertz’s work thus located and confronted the profound dichotomy of “something abstract that is also figurative.”

On view at Vito Schnabel Gallery St. Moritz, Lüpertz’s complex explorations are manifested in two bodies of paintings, selections from the late 1980s and early ‘90s, and recent canvases. In the 1980s, Lüpertz built upon the engagement with Greek mythology that had begun with his ‘dithyrambics,’ developing a new series based upon the myth of Orpheus and meditating upon the paintings of Jean-Baptiste-Camille Corot and Nicolas Poussin. A highlight of the exhibition in St. Moritz is a masterpiece of this period, the monumental two-paneled painting Die Vertreibung aus dem Serail (The Expulsion from the Seraglio), created in Istanbul in 1987 for the First International Istanbul Biennial, where it was exhibited in the Byzantine church St. Irene.

Parallel to his painting practice in the ‘80s, Lüpertz was evolving as a musician, drawing influence from classical composers and, in particular, the operas of Wagner and Mozart. Die Vertreibung aus dem Serail draws from the narrative of Mozart’s favored 1782 opera ‘Die Entführung aus dem Serail’ (The Abduction from the Seraglio). Set in a Turkish harem, the tale is a lighthearted and farcical romance that follows the Spanish nobleman Belmonte on his quest to rescue his beloved Konstanze, and her maid Blonde, who have been captured and sold to Pasha Salim. Charged with intense expressivity, this painting merges pictorial motifs with abstraction in a contemporary reimagining of classical style. The compositional structure and narrative of the underlying story are both subsumed by Lüpertz’s bravura handling of paint, and an approach to color, line, tension, and gesture that result in visual spectacle.

Five paintings on view from 1990 are characterized by the predominantly dark palette typical of Lüpertz’s mature work. His expressive use of color haunts these paintings. Despite hints offered by its title, Vier Generationen (Four Generations) (1990) offers up a complex spatial approach that rebuffs the viewer’s efforts to fully read its enigmatic presence. A chalky blue hue washes over the canvas, seeping into gaps between forms and lines. Frenzied cross-hatched marks reverberate around four distinct abstract bodies that appear to hover in space, morphing into corporeal elements and then dissolving again.

Lüpertz’s most recent work, represented here by paintings from 2016 and 2017, revisits antiquity through the theme of Arcadia, a pastoral utopia that has invaded the collective consciousness of Western art history since ancient Greece. In these paintings, Lüpertz mines the story of the mythical poet and musician Orpheus. Orpheus und Eurydike I (Orpheus and Eurydice) (2017) and Tod des Orpheus (Death of Orpheus) (2017) both depict statuesque nudes. In the former, the spirit of Eurydice floats over Orpheus’s shoulder as they approach the threshold of the Arcadian countryside, before she fatefully falls back into the depths of the underworld. In the latter, Orpheus is surrounded by the Maenads, the nymphs of Dionysus, who are responsible for his death. Meanwhile, in Ohne Titel (Untitled) (2016), a semi-nude female figure, possibly Venus, sits in a classicized pose in an Arcadian landscape. In Jäger (Hunter) (2017), a male figure is rendered in the forest.

In each canvas from the Arcadia series, Lüpertz seduces the viewer with his sensual handling of paint. Hues vary from flesh pinks to olive greens to smoky grays. The artist’s application of his medium is gestural and rhythmic, emphasizing the surface of his work and calling attention to the intense pleasure to be found in the act of painting itself. The graphic outline of a lustrous blue-violet flower, along with a dotted background pattern, directly challenge the pure classicism of Ohne Titel (Untitled). Likewise in Jäger (Hunter), Lüpertz’s bold, heavy vertical strokes of black paint wash over the background of his canvas, obscuring the blue-green ground beneath, while drips and sensorial excess muddy the representation of his figure. Exuding a palpable push-and-pull energy, these canvases find Lüpertz still striving toward an ever-greater and more sublime engagement with the poles of figuration and abstraction. 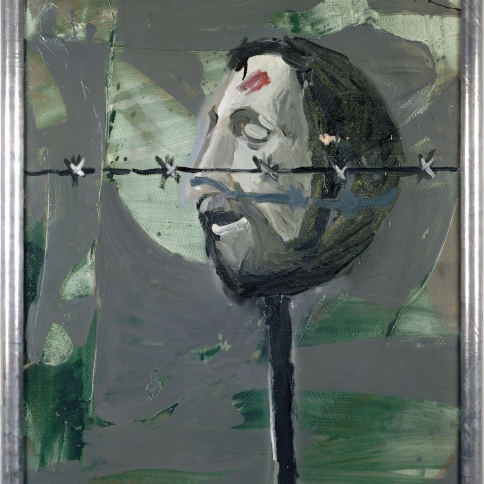 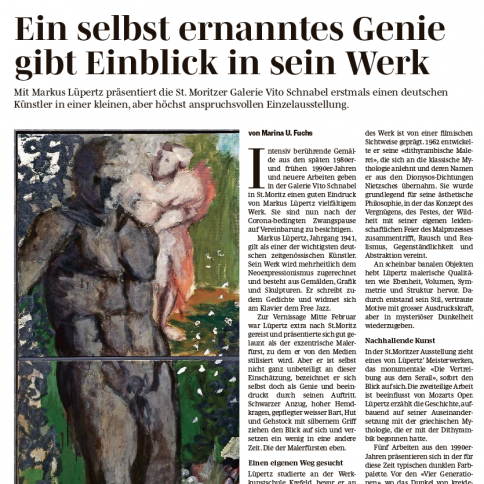 A Self-proclaimed Genius Provides Insight Into His Work
Marina U. Fuchs, Südostschweiz May 28, 2020