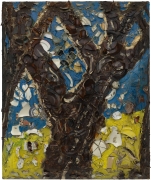 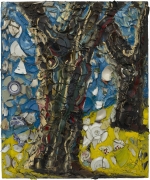 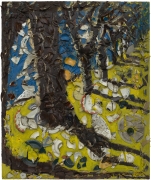 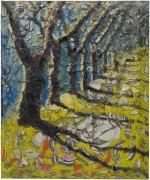 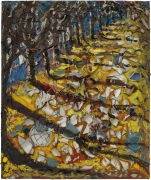 Julian Schnabel: Trees of Home (For Peter Beard), featuring six new plate paintings, will be on view at Vito Schnabel Gallery in St. Moritz from December 19, 2020 through April 4, 2021.

The artist’s subject is always what to paint and how to paint, in this case the distinctive allée of trees in Saint-Rémy de Provence, made famous by the many paintings and drawings of Vincent van Gogh, who spent a year in that small town’s asylum, provide an opportunity. With the Trees of Home (For Peter Beard), Schnabel celebrates the notion of an enriching dialogue – with a subject, a technique, a relationship – that endures and evolves over time. He has dedicated the exhibition to the memory of his lifelong friend, the late American artist and photographer Peter Beard.

“The first time I met Peter was about 45 years ago, when I was a kid in New York City, with my best friend Bob Williamson, they were much older than me,” Schnabel recalls. “In the summers in Montauk, at the end of Long Island, I watched Peter and Bob spending countless days carrying and cataloguing countless variations of rocks according to colour, size, shape and their aesthetic judgment, some looked like baked bread, some like salami. In truth I can’t look at the beach or the sea out here without seeing them. They have coloured my experience of this place. Peter and I were neighbours in Montauk. We lived less then 2 miles away from each other and we savoured those moments in the summer when we would have a tunafish sandwich with lots of mayo and drink Clamato and Vodka or just a glass of milk, at the table, in the garden behind his house, and talk. He loved to talk. And then after that he would come over to my outdoor studio and extrapolate on my works in progress. He had a lot of opinions and I loved him for every one of them, even if we didn’t agree most of the time!”

Schnabel’s practice embraces unconventional methods and material experimentation, while exploring the physicality of the pictorial surface and the relationship between figuration and abstraction. His subjects are non-hierarchical. They are drawn from personal narratives and sources that span history and mythology, and reflect the artist’s interest in philosophy and contemporary thought and humor. Themes of time, death, and immortality are common threads throughout Schnabel’s oeuvre in both his paintings and films, informing one another in intricate ways.

Through the process of writing and directing the film At Eternity’s Gate (2018), an intimate portrait of Vincent van Gogh and the urgency of painting that preoccupied the artist’s mind, Schnabel formed a deep understanding of Van Gogh’s practice and the motivation that led to his ‘repetitions.’ Creating versions of Van Gogh’s paintings to use as props in his film, he found himself immersed in the mind of the master.

Never tiring of nature’s haunting beauty, Van Gogh often revisited the trees of Saint-Rémy, refining and expanding his visual language to capture their essence, echoing his cyclical return, again and again, to the theme of trees. Schnabel’s highly inventive approach to textural painting manifests in his now-iconic ‘plate paintings,’ which are comprised of broken vessels and shattered shards of ceramics that the artist has hammered and smashed, glued to wooden armatures, and then painted over. In the new paintings in this exhibition, the exuberantly sculptural and tactile body of each work speaks to Van Gogh’s preoccupation with surface and the physicality of what a painting could be.

In Trees of Home (For Peter Beard), Schnabel’s dark barren trees reach upward and stand in stark contrast to the horizon, where brilliant cerulean blue skies meet a sprawling yellow ground. In some of these six compositions on view, a row of planted trees casts shadows of trunks and limbs whose silhouettes stretch outward like the arms of a receding loved one. In other paintings, Schnabel closely crops his composition, focusing upon the forms of one tree or a pair. In all of the new works on view, glinting shards of porcelain render a glistening, pulsing light that washes over the pictorial surface. The impact of these six paintings derives from such effects, but transcends them: the physical and pictorial become indistinguishable from one another and command a new way of seeing.

Schnabel’s new works speak to the genre of landscape painting, which the artist first explored in the early 1980s in works such as The Sea (1981), The Mud in Mudanza (1982), and The Raft (1982). The series on view in St. Moritz calls to mind The Walk Home, an expansive triptych of a forest that Schnabel completed in 1985, after seeing Van Gogh’s retrospective at the Metropolitan Museum of Art in New York City.

In capturing the life cycle of nature, Schnabel alludes to the power of memory and the inevitability of cycles in life. He recalls the last summer that he and Peter Beard shared together at their neighboring homes in Montauk, New York, after the release of Schnabel’s film.

”The last time I saw Peter was last summer. He had already had a stroke and it was difficult for him to speak in that fluid way that he would wrap his mind around a thought and not relinquish it until it had been exhausted. That afternoon was no different. He drove himself mad, because he wanted to show me the trees of Saint-Rémy in his Van Gogh book, that were exactly the trees in our film as well as the trees in Van Gogh’s paintings and Francis Bacon’s paintings of Van Gogh’s paintings. Peter was very fond of Francis Bacon and both of them were of course fond of Van Gogh. These trees are the subject but also the witnesses that lived those days with Vincent, his personification, his self-portrait as trees. That being said, Peter’s futile search, that afternoon, for that Van Gogh book, with those images, of those trees, is an indelible moment for me. His need was, the need for two friends that happened to be artists, to share the same thought, that same recognition at the same time. He wanted me to see exactly what he was seeing at that moment. That was his desire. And he couldn’t find the book, it caused him great frustration. I never saw Peter again. He died in March before the summer when he could have showed me those pictures, of those trees.

Peter’s wife Nejma found the book with Peter’s notated flagged pages. It is rare for me to paint from photographs, but I knew the trees well, I had seen them in person. I made these paintings for him. Making it back to Montauk, each summer is always coming home for me. Thus the trees of home for Peter Beard.” 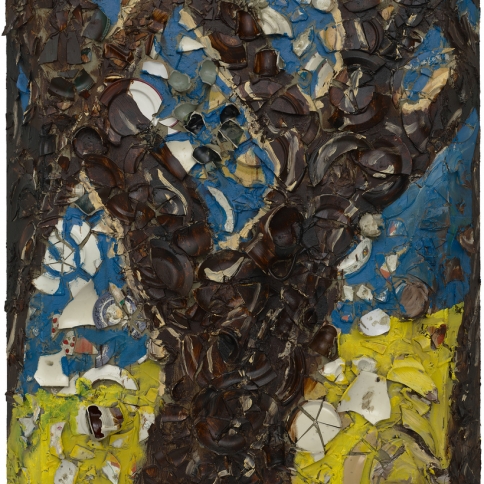