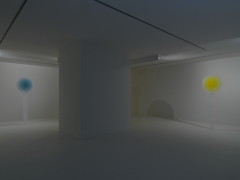 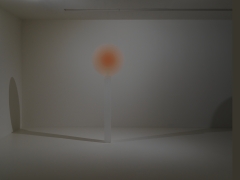 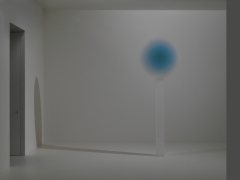 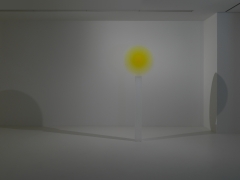 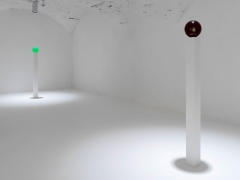 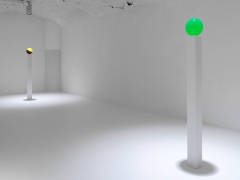 Beginning July 16, 2019, Vito Schnabel Gallery is pleased to present Helen Pashgian: New Lenses and Spheres, the gallery’s first exhibition devoted to the West Coast artist, a pioneer and preeminent figure of Southern California’s vaunted Light and Space movement that emerged in and around Los Angeles in the late 1960s. This is Pashgian’s first solo exhibition in Switzerland.

The exhibition presents eight new sculptures, extending Pashgian’s exploration of her earliest forms—her signature discs and spheres—and revealing the artist at the height of her technical prowess as a true innovator in the development of the industrial plastic arts. Manifesting a tension between the material and immaterial, illusion and perception, Pashgian creates objects that dissolve their own physicality as they materialize the subtly shifting, luminous, and translucent qualities of light.

For decades, Pashgian has harnessed the possibilities of plastic and its malleability to expand visual and physical fields of perception. Employing color as her primary sculpting element through the use of cast resin and acrylic, her work suspends, traps, and reflects light within pure form. Her lifelong fascination with light’s intangible character has led her to pursue its palpable poetics. Transfixing its sensuous and meditative qualities into enigmatic forms, her work engages the viewer in movement, yielding experiences that can be felt as intensely as they can be seen. “One must move around to observe changes,” Pashgian explains, “coming and going, appearing and receding, visible and invisible— a phenomenon of constant movement. It touches on the mysterious, the space beyond which the eye cannot go.”(1)

At Vito Schnabel Gallery St. Moritz, three of Pashgian’s latest lenses, the first of their size ever exhibited by the artist, and five spheres offer a transcendental aesthetic experience of heightened perception. Exploring the properties of transparency and translucence, they express a longing for the artist’s Southern California childhood and evoke an ethereality that belies the scientific acuity of their alchemical make up. Glowing, mysterious, and meditative, these works invite viewers into their visual depths to engage with the sensuality of light’s mesmerizing force, and advance Pashgian’s practice to new heights.

About the Exhibition
Born in Pasadena, California, Helen Pashgian emerged on the Los Angeles art scene in the late 1960s upon returning from Boston, where she trained as an art historian. While Pashgian began her career making paintings, she quickly abandoned the canvas in favor of experimental materials, taking up cast polyester resin, a declassified military substance. Seduced by its translucence, she began experimenting with its technical properties—manipulating it with subtle and saturated hues and molding it into solid forms whose glossy, untarnished surfaces aroused the interplay of light.

Pashgian’s commitment to light as both the medium and message of her art was revived when she returned home and reconnected with the California Coast. Fueled by a nostalgia for the landscape—she played in tidal pools and walked the beaches in her youth—she recalls the movement of the “ripples of light” that penetrated the water and danced on its surface. “That was the very first time I sensed that light was an alive thing,” the artist explains, and that overriding ‘thingness’ remains “as close to my conscious memory as yesterday.”(2)

The 1960s comprised a decade of unparalleled technical innovation, and Pashgian was at the forefront, spearheading the advancement of a new artistic aesthetic. Along with other Los Angeles-based artists, including James Turrell, Robert Irwin, Larry Bell, Mary Corse, Peter Alexander, Laddie John Dill, DeWain Valentine, and Hap Tivey, she enthusiastically embraced the high-tech aerospace materials that were being developed amidst the Cold War’s space race. Refined and seductive, they imitated the slick surfaces of surfboards and automobiles that defined the postwar landscape of Los Angeles, a place where the natural and manmade coexist uniquely.

Pashgian developed a stringent and rigorous mode of working in her Pasadena studio, applying the theoretical discipline and analysis she acquired in her art historical training to the evolution of her art. She began crafting meticulously polished and complex objects on an intimate scale that employed a reductive vocabulary of simple geometric forms. Cast polyester resin was a captivating but unforgiving material that relied upon an exacting chemical process and the expertise of technical skill. Accepting a residency at Cal Tech from 1969 to 1970, she collaborated with Jet Propulsion Laboratory (JPL) engineers and scientists to study the properties of light. There, she was also introduced to the technical fabricator Jack Brogan and his workshop in Venice, which provided an invaluable resource to Light and Space artists in their unwieldy engineered works that explored the stunning possibilities of the refraction and reflection of light.

At Vito Schnabel Gallery St. Moritz, Pashgian’s decades long explorations and innovations continue. In the artist’s Untitled (2018) lenses, light, color and form sublimely dissolve into one another, creating an apparition that appears to hover and pulsate in space. “I’m interested in disembodied light,” Pashgian explains. “This is about looking at objects, and having light change, alter and dematerialize them.”(3) She selects a single hue—vivid citrine, hazy blue, or sandy peach—for each carefully crafted lens. The hue is concentrated in the center of the disc and then softens and diffuses as it radiates to the outer edge.

Luminous, palpable, and alluring, and nearly indistinguishable from the atmospheres they inhabit, the lenses are also a result of extraordinary human labor and painstaking precision. After Pashgian abandoned polyester resin for its extreme toxicity, she began to search for a new material that would yield similarly sensational optics. She experimented for years with different epoxies, testing these clear substances and assessing their stability. Here, employing cast epoxy resin, she has achieved an object that is thinner, more minimal, and highly refined than previously fabricated before.

The exhibition also presents five new Untitled (2018) spheres. Modestly scaled at six inches in diameter, Pashgian’s latest spheres rest enigmatically atop tall white pedestals. Each contains a solid acrylic element that appears to float, suspended, within the object’s viscous internal volume. Within a smoke black orb, a clear acrylic shape whirls and churns, casting shadows and refracting light as it enters the vessel. In another multi-faceted sphere, Pashgian layers bands of color in yellow, white, blue, red, and pink. As the viewer’s position to the work shifts, so does the nature of the sphere. From one angle, colors change in saturation and hue as green emerges from layers of blue and yellow; from another, shapes appear and recede, the flat ribbons of color morphing and transforming into a spheric volume of its own within the larger sphere.

Pashgian’s other spheres are cast in the primary colors of light: green, red, and blue. These works contain acrylic shapes such as pyramids, cones, and tubes. Evoking intrigue and movement, their mysterious internal complexity draws in the viewer through contemplation, slow looking, and wonder to perceive the beauty of light.

About the Artist
Helen Pashgian was born in Pasadena, CA in 1934. She earned her B.A. from Pomona College in 1956 and studied at Columbia University before receiving her M.A. from Boston University in 1958. She was an artist in residence at the California Institute of Technology from 1969—1970. She received a National Endowment of the Arts Individual Artist Grant in 1986. In 2013, she was a recipient of the MOCA’s Award to Distinguished Women in the Arts. Pashgian was included in Pacific Standard Time: Cross Currents in L.A. Painting and Sculpture, 1950—1970 at The Getty Center, in the related Pacific Standard Time exhibition Phenomenal: California Light, Space, Surface at The Museum of Contemporary Art, San Diego, and was the subject of a major solo exhibition, Helen Pashgian: Light Invisible, at the Los Angeles County Museum of Art during the spring of 2014.