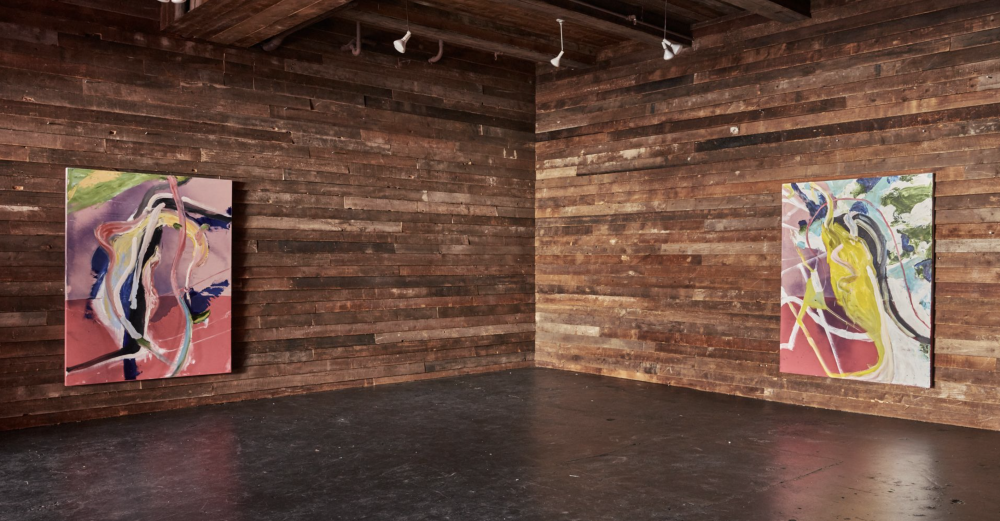 “A long time ago, I had a show at the Whitney. Was I excited about that? Yeah, I was. Does it matter now? No.”

The artist Julian Schnabel was driving in Troncones, Mexico, near where he has a home, when the pink fabric roof of a makeshift toy store caught his eye. “I found that material to look like a painting,” he says, “So I stopped and bought the roof of the guy’s store and stretched it between some palm trees.”

The resulting pink paintings are part of The Patch of Blue the Prisoner Calls the Sky, a show of 13 of Schnabel’s new works opening at Pace Gallery in New York on March 6. Schnabel, 68, painted the works in Montauk with tarps found in Mexico, two of the places along with New York City where he divides his time.

As Schnabel nears his eighth decade, each new show offers a lens through which to consider his legacy. Whereas in 2017 Pace exhibited a series of his famous plate paintings, the new show demonstrates Schnabel’s fascination with different materials and surfaces and his dislike of what he calls “signaturizing,” or, per his memoir, “artists believing their work should have the same appearance.” His paintings on found materials aren’t what he’s best known for, but he’s been working with them for almost as long as he’s been working with the plates.

The new works combine his energetic, brightly colored lines and shapes with light leaks and irregularities from where the tarps were tied and knotted in their past lives. Most aren’t perfect rectangles, a byproduct of Schnabel’s palm tree setup: When he paints outside, he’ll take a piece of wood and staple it to the top and bottom of the canvas where it hangs, then eventually add aluminum stretchers that maintain the less-than-precise geometric shape.

“I think they’re a catalog of marks, different ways of putting paint on different shapes,” he says of the paintings during an interview at his West Village condominium, in a building known as the Palazzo Chupi. Ahead of the opening at Pace, the paintings in the show are being stored here. In 2008, the facade of Schnabel’s residence became something of a local spectacle when he added a pink, Venetian-inspired stucco palazzo squarely atop the early 20th-century factory building where he’d been living since 1987.

Schnabel lives and works on five of the palazzo’s sprawling floors. As he walks around each floor identifying his artworks and those by others in his vast collection, Schnabel is like a gruff, hoodie-wearing Willy Wonka, inviting newcomers in for a tour of his colorful, mysterious world. He’s less in his element during a sit-down interview—he texts, buries his head in his hands and at one point calls a member of his studio staff, asking him to fetch a copy of his memoir—but when he’s leading the way, it’s easy to say why he’s been frequently described as a larger-than-life character.

The walls in one high-ceilinged room are bright pink like the building’s exterior; the master bedroom is a shade of cerulean blue and bathed in sunlight streaming in from the terrace outside. Surprises like a taxidermied monkey swinging from a curtain rod or one of Schnabel’s large goat paintings are found around every corner. Urs Fischer’s lifesize candle sculpture of Schnabel sits atop a giant crate in the center of one room, a mound of wax from where the wick at the back of the head was once lit encrusted on the floor. An Andy Warhol painting of Schnabel, made from a photo taken by his first wife Jacqueline, hangs on a wall nearby. Also in the room: a Tom Sachs piano (“It’s a really good sculpture, and you can play it too”), a Georg Baselitz painting in a frame Schnabel says belonged to the king of Germany in the 19th century and another of Schnabel’s goats, this one painted over an image of George Washington holding Cornwallis’s sword.

On the second floor is one of Schnabel’s famous plate paintings, a huge one, 115” by 228”, The Mud in Mudanza, created in 1982. Schnabel is prolific to an extreme, producing so many paintings that a number end up in warehouse storage—in addition to his sculptures, films and interior design projects like the Gramercy Park Hotel, as well as much of the furniture in the Palazzo Chupi. (He also has six children, who range in age from six to 38.) Schnabel was a multi-hyphenate before the term existed. But it’s his plate paintings that put him on the map.

He first had the idea for them in 1978, when he felt inspired to make a painting the size of the closet in a hotel room where he stayed in Barcelona, cover it with broken plates and paint over them. One day Schnabel, with his friend Joe Glasco, bought all the dishware at the Salvation Army in Chelsea. He had two wooden armatures made and laid a spread of plates on the first, then smashed them with a hammer.

The ingenuity of the plate paintings was part of what propelled Schnabel into the ranks of the original celebrity artists of the 1980s, alongside his friend the painter Jean-Michel Basquiat. Elements of Schnabel’s persona, like the trademark pajama sets he still wears out, also contributed to his stardom.

Schnabel seems reluctant to acknowledge the way his celebrity has contributed to his success. “I actually think that I became known because of the paintings,” he says. “I don’t know. Now the art world is very different. I guess it had a big effect on what happened with Jeff Koons and to Damien Hirst. But it wasn’t my intention necessarily to pander to that or conform. How’d it affect me? I don’t know. You kind of grow up in public a bit.”

He says the actors in his first film Basquiat, including Christopher Walken, Dennis Hopper and Gary Oldman—who plays an avatar of Schnabel named Albert Milo—wanted to work with him as a director because they were interested in his paintings. The film, about the painter and his untimely death, also features David Bowie as Andy Warhol, Parker Posey as gallerist Mary Boone and Jeffrey Wright as Basquiat. Schnabel has directed six feature-length films, including the Golden Globe and Cannes award-winning The Diving Bell and the Butterfly and last year’s biographical Van Gogh drama At Eternity’s Gate. “I never really thought of myself as a filmmaker,” says Schnabel. “I just had a part of my brain that was a storyteller.” (Of Harvey Weinstein, who before the allegations of his sex offenses came out distributed four of Schnabel’s films, Schnabel says he no longer has a relationship.)

Schnabel was born in Brooklyn in 1951. When he was a kid, he writes in his memoir, C.V.J.: Nicknames of Maitre d’s & Other Excerpts From Life, he would make drawings on paper and think the stock wasn’t thick or big enough. At age 15 he moved to Brownsville, Texas with his family. Bored and without many friends, he turned to painting and surfing to fill his free time. In 1973, at age 21, he moved back to New York after being accepted to the Whitney Musuem’s Independent Study program. He made art while working as a sunglasses salesman, a cab driver and a cook at Locale, the Waverly Place restaurant opened by Mickey Ruskin, owner of the restaurant/nightclub/artist hangout Max’s Kansas City. Schnabel’s first New York solo show took place in 1979 at Mary Boone gallery, featuring his wax paintings. Another solo exhibition of his plate paintings, as well as shows in Europe and the Whitney, followed.

In 1992, he told New York magazine, “I’m as close to Picasso as you’re going to get in this f—ing life,” a quote that’s continued to be cited in stories about him ever since. Now he says, “I think that I was kidding around. People have very little sense of humor. I wouldn’t get hung up on that.” He does, though, have a copy of a Picasso that he painted in his library. “Cy Twombly had an incredible drawing in his house years ago, a beautiful line drawing in a great frame,” says Schnabel. “I said, ‘That’s a great Picasso!’ and he said, ‘Oh I made that.’ And I said, ‘Okay, well, I’ll try too.’ I painted it one day and my daughter came up and said, ‘When did you get that?’ and I said, ‘Today.’”