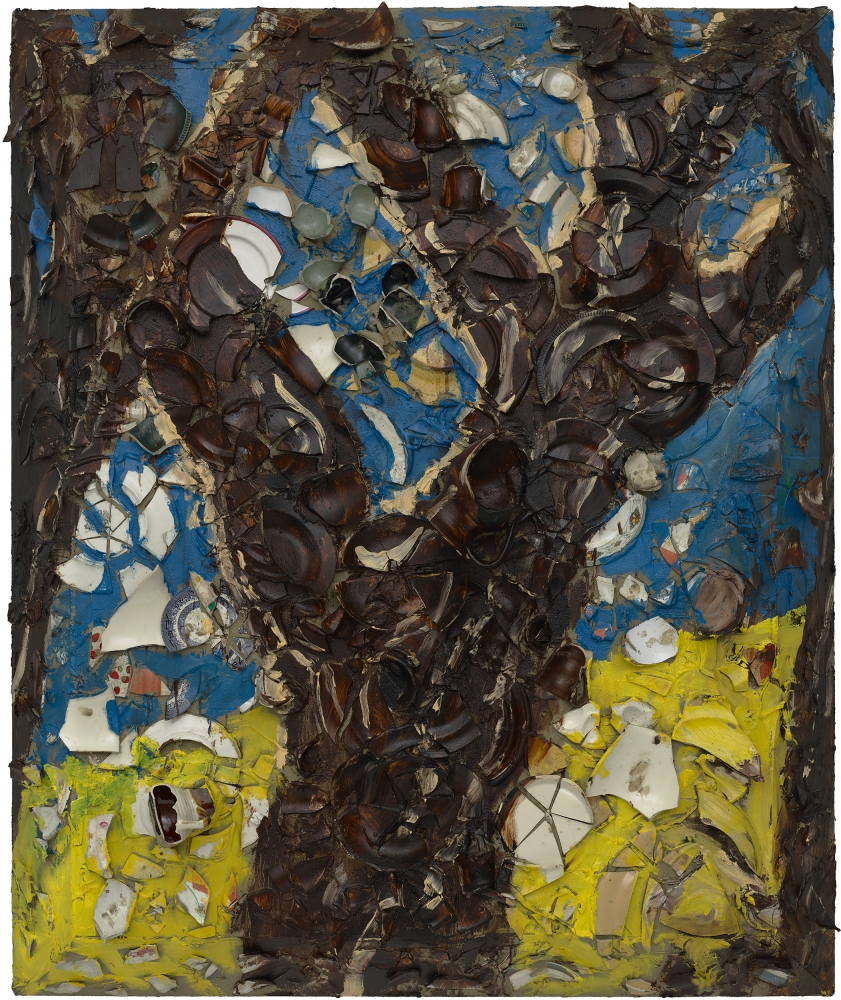 Julian Schnabel’s latest series of paintings, titled Trees of Home (For Peter Beard), is being exhibited until April 4th, 2021 at Vito Schnabel Gallery (St. Moritz, Via Maistra 37). The exhibition is composed of 6 works and is dedicated to the memory of Peter Beard, the celebrated American artist and photographer, as well as an old friend of Schnabel’s.

Born in Brooklyn in 1951 to a Jewish family, Schnabel is one of the most celebrated painters and film directors on the contemporary New York scene and among the major representatives of neoexpressionist art. He has become a figure of the art world since the ‘70s, his paintings characterized by grand dimensions and the commingling of techniques and materials. Schnabel reintroduced the human sentiment into painting, escaping from flatness, thanks to the accumulation of unconventional materials such as black velvet, aged tarpaulins, cardboard, and broken plates. His distinctive brandmarks are the famous “plate paintings,” created on surfaces made up of ceramic plate fragments.

Schnabel’s style embraces unconventional methods and material experiments, exploring the relationship between figuration and abstraction. His subjects are principally based on personal stories or on mythological sources, which reflects the artist’s interest in philosophy, humor, and contemporary ideas. The concept of time, death, and immortality are guiding subjects throughout all of his artistic creations, which includes filmography.

With Trees of Home (For Peter Beard), Schnabel created new expressive forms that carry forth a dialogue created by his predecessors, studying the represented subject in an innovative manner thanks to a singular technique. We find ourselves in Saint-Rémy de Provence, in a tree-lined street once made famous by the paintings of Vincent van Gogh, who spent approximately one year in the city’s asylum.

It was actually during the making of the film, At Eternity’s Gate, which Schnabel directed in 2018, that he felt the spark with the Dutch master. He thoroughly understood the urgency of painting that tormented van Gogh and the reasons that led him to carry out his obsessive repetitions. Like van Gogh, Schnabel reproduced the trees of Saint-Rémy many times, refining and expanding his visual language to capture their essence thanks to the technique used in his “plate paintings,” which has meanwhile become iconic. His masterpieces are made using broken vases and shattered ceramic fragments, first hammering them and then gluing them to wooden frames and then painting on them.

The Trees of Home (for Peter Beard) series is the perfect synthesis of the physicality of matter and paint; Schnabel’s dark and arid trees rise upwards, standing out in stark contrast to the horizon, where the bright blue of the sky meets the yellow of the soil. In most of the works in the show, the shadows arising from the tree trunks run across the canvas, as if they were the arms of a loved one moving away from the viewer’s gaze. A typical element of this manner of production is the brightness rendered by the porcelain elements as they give new light to the canvas with their glittering features.

The aim of the Trees of Home series is to tell the life cycle of nature, retracing the changes and alluding to the power of memory and the inevitability of the cycle of life. In fact, through these paintings, Schnabel remembers the last summer with his friend Peter Beard in their houses on Montauk, just after the release of the film At Eternity’s Gate.

“One afternoon that summer Peter got angry because he absolutely wanted to show me the trees of Saint-Rémy in his van Gogh book, which were exactly the trees in my film, in the paintings of van Gogh and Francis Bacon. Peter’s search that afternoon, for that van Gogh book with those images of those trees, is an indelible moment for me. He wanted me to see exactly what he saw at that moment. It was his wish. And not being able to find the book caused great frustration. […] After Peter's death, his wife Nejma found the book with the pages marked by him. It is rare that I can paint using photographs, but I made these paintings for him."

The Swiss exhibition is an expansion of the triptych of a forest that Schnabel completed in 1985, after participating at the retrospective dedicated to van Gogh at the Metropolitan Museum of Art, New York. It promises to be an excellent opportunity to get to know and deepen knowledge of the artist-director’s works – which have been exhibited in the most prestigious museums in the world, such as the MoMA in New York, the Tate Gallery in London and the Centre Georges Pompidou in Paris – who uses a highly experimental approach in the use of materials, gestures and forms to create his paintings, with the goal to break down the distinction between abstraction and figuration.

Julian Schnabel’s works, currently on view at Vito Schnabel Gallery, reach prices from $500K to $600K. His auction record dates back to 2017 at Christie’s New York with the work Ethnic Type from 1984 ($1.4 million), whereas his “plate paintings” from the ‘80s have values between $100K and $900K, depending on their size.