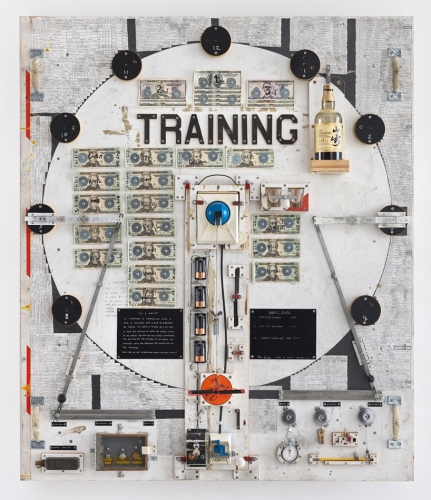 following his swiss passport office earlier this year, new york–based artist tom sachs presents the pack, an exhibition that gathers new and recent sculptures that materialize the artist’s long-standing fascination with switzerland. beginning 28 december, the solo exhibition at vito schnabel gallery in st. moritz will display works that transform the pristine image of the alpine nation, questioning notions of artificiality, authenticity, and what it means when ‘being swiss’ becomes a luxury commodity in itself.

as an idealized brand, switzerland has long held fascination for sachs, who over the last three decades has been driven by what he describes as ‘a desire to remake the world not as it is, but the way it ought to be.’ the exhibition at vito schnabel takes its title from the artist’s latest sculptural invention the pack (2018), which itself references joseph beuys’s 1969 installation of the same name. beuys’s work consisted of a volkswagen van disgorging twenty-four wooden sleds from open rear doors. in sachs’ sly homage, the materials of the german beuys – felt blankets, flashlights, and lumps of animal fat – morph into a reference to the pontifical swiss guard. three fully functioning electric motorcycles, each named for a city in the african states (ie. lagos, mogadishu, kinshasa), are outfitted with swiss blankets, flashlights, and such tools of ancient and modern warfare as a machete and a BB gun. the artist has equipped each of the three vehicles with a postmodern survival kit including snacks. when activated in ritualized joy ride, this moto-pack becomes a symbol one of the world’s oldest intact military units— the swiss guards were originally mercenaries instated by pope julius II in 1506 for their reputation as loyal and invincible soldiers—while evoking the chaotic energy beuys promulgated as essential to social progress.

other works in the exhibition include the sculpture heidi (2018), a reference to johanna spyri’s 1881 novel which chronicles the life of a young orphaned girl raised by her grandfather in the swiss alps. in sachs’ version, the wholesome 19th century folklore heroine is refashioned as a symbol of sensuousness and arousal, ubiquitous 21st century commodities. on display are also two new paintings, switzerland (2018) and maximum luminosity (2018), in which the artist employs the landscape of africa to draw our attention to issues of geopolitical and economic consequence, raising barbed questions about identity and belonging.

several pieces also extend to sachs’s other immersive worlds including the 2018 painting moon, inspired by man’s lunar odyssey. meticulously handcrafted to reveal the qualities of its making, this work resonates as an object of quiet contemplation, devotion, and conquest, tracing the cycles of how we measure our days. wall drawing number one (2017) celebrates the importance of ritualized activity in the artist’s ever-evolving practice, while commemorating the conceptual influence of an american titan who was his close friend. sachs curated an exhibition of lewitt’s work at vito schnabel gallery earlier in 2018.