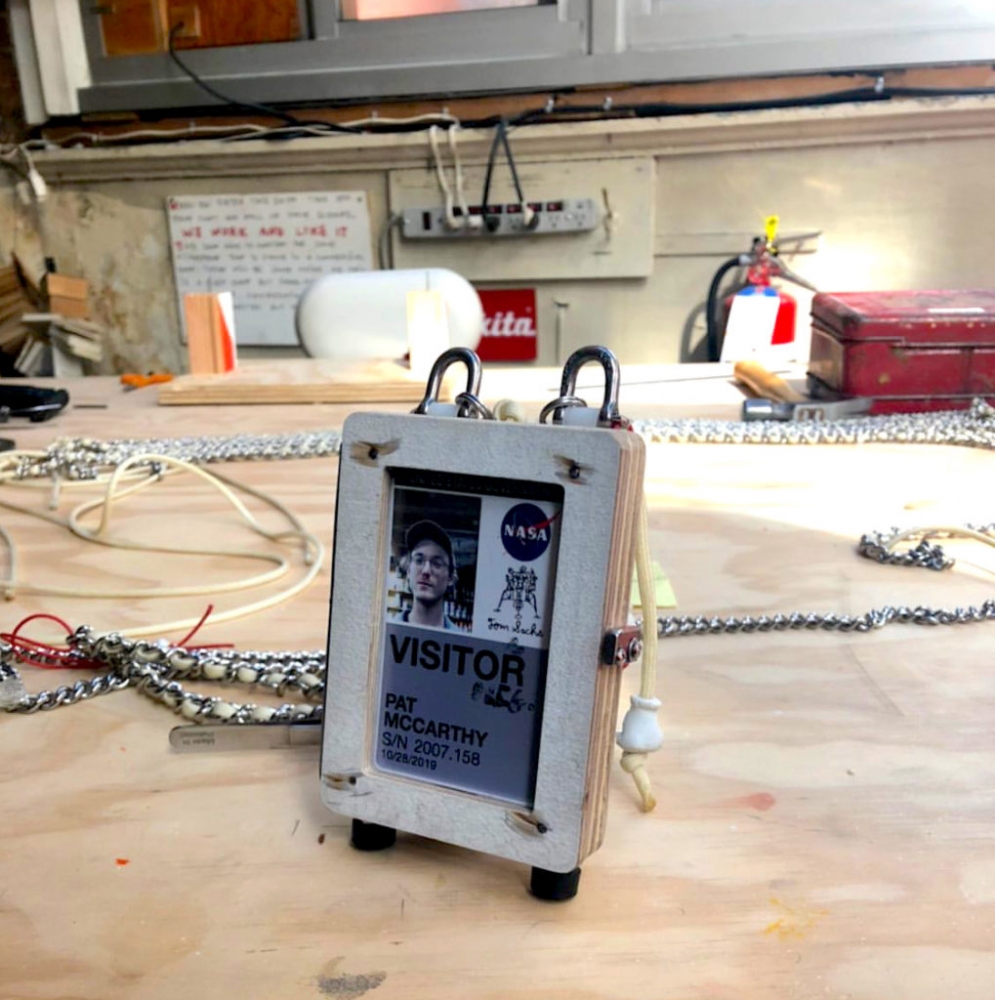 Tom Sachs made this Chanel-branded ID holder for the Art Production Fund gala. Photo courtesy of the artist.

The artist debuted the objects at the Art Production Fund gala, where he worked alongside the French luxury brand to realize an immersive art experience.

The Art of Craft is a new series in which Artnet News shares the story behind the making of a special design object.

Tom Sachs has created a limited-edition ID and custom ID holder featuring the Chanel logo—but if you want one of your own, you’ll have to go through the artist’s signature “indoctrination program.”

The artist debuted the art object at last week’s Art Production Fund gala in New York City, where he and his wife, Gagosian director Sarah Hoover, were the guests of honor. It was Hoover—a friend of the Paris-based heritage house—who connected Sachs with Chanel, and brought them on board as an event co-chair.

“This is entirely Sarah’s doing,” Sachs told Artnet News of the brand’s involvement while at the gala, as he snacked on pigs in a blanket. Hoover designed the night’s over-the-top menu, a mix of comfort food—hamburgers, tater tots, ice cream sundaes—and more high-end comestibles such as caviar from Regalis Foods and champagne courtesy Ruinart. But it was Sachs who insisted on his own supply of puff pastry-wrapped mini hotdogs.

Sachs spent much of the evening’s cocktail hour hanging out at the Chanel nail bar, which he designed in cooperation with the brand, where guests could get a manicure featuring custom nail decals conceived by the artist.

But the “indoctrination process” came first, and if you passed the test—which is actually given to prospective Sachs studio employees—you got an official ID from the Tom Sachs Space Program.

“It’s sort of like when you wear a Yankees hat,” he explained, before I protested that I was a Mets fan. “You’re not on the Mets, but you’re part of the Mets family. So today you are part of the team, and so is everyone here.”

Sachs has expressed a wariness about brand partnerships in the past. His only official collaboration was with Nike, for which he produced a line of coveted sneakers and athletic apparel. His DIY woodshop aesthetic seems at first glance to be at odds with Chanel’s elegance. But the artist has actually incorporated the company’s logo into his work in the past.

“I’ve always loved Chanel, it’s kind of the NASA of fashion,” he said. “It’s a powerful brand—the logo and the identity and history. It’s got force.”

To unveil the new collaboration, Sachs restaged a performance art piece from the 1996 Armory Show—then called the Gramercy International Art Fair—titled Sick Nails. Among the art world luminaries who got their nails done by Sachs all those years ago was the cofounder of the Art Production Fund, Yvonne Force-Villareal, who was delighted by the repeat performance.

“It’s an honor to do Yvonne’s nails again,” Sachs shared.

The artist actually built the Chanel nail bar over the summer after Hoover came home from a brand event with a goodie bag full of Chanel nail polishes. Initially, Sachs was considering using a custom camera he’d built some years ago to take portraits of guests at the gala, but he found that developing the images took an impractically long amount of time.

When the Art Production Fund team saw the manicure station at Sachs’s studio, they quickly shifted gears: the only portrait would be the ID card, and the main event would be the nail bar.

Once Chanel came on board, employing the help of their in-house manicurists for the event, Sachs got the idea for the custom badge holder, crafted from wood, metal, and bullet proof glass. Originally envisioned as a kind of lanyard, the piece soon morphed into more of a mini-bag, albeit one that can also hang on the wall or be displayed on your desk.

He mimicked the Chanel handbag chain by weaving a special rope through industrial-grade chainlink and used pyrography to burn the brand’s logo onto the back.

At first, Hoover was worried about how Chanel might react.

“It’s one thing to steal their branding for a piece that sits at a museum,” she said. “It’s another to do that at an event that’s in collaboration with them. But he was like, ‘I don’t care, it will look so cool.'”

And fortunately, the brand had no objections.

“The combination of something really bricolage and handmade, and something as finished and high-end and fancy as the Chanel logo, is really interesting,” Hoover said. “Chanel is this luxury brand that makes tons of units of everything, but they have an unprecedented emphasis on the handmade. The hours of manpower and workmanship that goes into so many things they make is incredibly personal.”

At the gala, getting the ID and manicure was $500. The VIP experience, with the limited-edition Chanel ID holder, was $5,000. Fortunately for those still interested, it’s still available by contacting the Art Production Fund directly—and passing the test. (All proceeds benefit the organization.)

And for Art Production Fund director Casey Fremont, the event could not have gone any better.

“The Tom Sachs Space Program Indoctrination and Reeducation Center including the Chanel Nail Station, the Sarah Hoover-curated menu including caviar and cheeseburgers—every detail represented them both individually and as a perfectly matched couple,” she said.