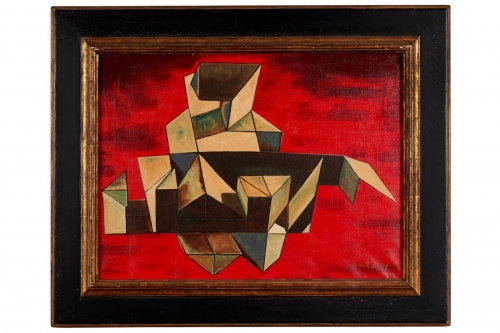 In an intimate show of nine paintings, Vito Schnabel brings to life a dialogue between the artists Man Ray and Francis Picabia—arguably under-appreciated modern-era masters.

For Schnabel—son of the painter and filmmaker Julian Schnabel —the exhibition features quintessential examples of works by two of his favorite artists, including Man Ray’s Non-Abstraction, 1947, and Picabia’s Helias, circa 1930.

Both are known to the arts community, but not the general public, he says, perhaps because these masters worked across artistic movements and genres. Man Ray is known for his photography, and roots in Dadaism, but few realize the extent of his painting and sculpture. Although he grew up in Brooklyn, and lived in New Jersey for a time, it’s often assumed he’s French since he spent much of his career in Paris.

Works by Picabia—who was, in fact, French—spanned impressionism to Dadaism to radical abstraction, according to the Museum of Modern Art, which held a retrospective exhibition of his work four years ago that highlighted the influence of his “relentless shape-shifting” on contemporary art today.

What set the stage for the exhibition for Schnabel was the acquisition of Non-Abstraction and Helias, pictures that each feature a face and a hand and have elements of figuration and abstraction (as Man Ray’s title implies).  Non-Abstraction is an oil-on-panel dominated by bold strokes of color that roughly resembles a face, with a hand clearly visible in the lower left. The nose is sculptural, and reminds Schnabel of an actual sculpture Man Ray made not long after this painting was done.

The painting had been acquired by a collector in Japan directly from Man Ray’s wife, Juliet, and then hadn’t been seen for more than 50 years. Schnabel tracked it down and “between some luck, persistence, and a good friend, we were able to get it.”

Helias, an oil-on-canvas, in far more subdued hues of brown, appears more clearly figurative, although an ethereal, abstract eye appears on the central figure’s forehead, with a similar pair of lips on the cheek. Hands extending from the top and bottom speak to Man Ray, who regularly photographed Picabia’s work after he arrived in Paris in the 1920s.

To Schnabel, movement present in both works create a “kind of harmonious language.”

All five paintings by Man Ray in the show were created over a decade, from 1944 to 1954, after the artist fled Nazi Germany, and include two works that were in an influential 1948-49 exhibition at Copley Galleries in Beverly Hills, Calif.

The Tempest, 1948, a Cubist-style image floating in a red sky that had also been purchased from Juliet and tucked away for years, is from a series known as Shakespearean Equations that borrows from the artist’s own Surrealist-inspired photographs of 20 years earlier known as the Mathematical Equations.

The second is The Tortoise, 1944, an oil-on-canvas of abstract shapes, that at 20 x 24 inches is relatively small, but in person, “is very powerful and feels bigger than it is,” Schnabel says.

At the 1948 exhibition, The Tortoise hung between Man Ray’s famous image known informally as the Lips, but formally as A l’Heure de l’observatoire - les amoureux, 1932-34, and Black Widow, (Nativity), 1915. Sotheby’s sold the latter in an October 2020 evening sale for US$5.8 million, with fees. Although the work was considered a famous example of Surrealism, Man Ray “wasn’t a Surrealist,” Schnabel says.

Among the four works by Picabia is Mendica, circa 1929-1934, a five-foot-tall oil-on-canvas, that had been owned by David Bowie for more than 30 years, according to Schnabel. Mendica is one of three works from the artist’s Transparencies series in the show—a set of paintings featuring “a bold new pictorial complex of layered and superimposed imagery,” according to the gallery.

To Schnabel, Mendica exemplifies the artist’s constant pushing of boundaries of what painting can be, “creating new surfaces, new images.”

Most of the works in this small show at Schnabel’s Clarkson Street gallery on Manhattan’s far West Side, are for sale, at prices spanning “a few hundred thousand to millions of dollars.”

While MoMA had a major retrospective of Picabia's career featuring more than 200 works in November 2016 to March 2017, a U.S. museum has yet to do the same for Man Ray. Schnabel hopes shining a lens on his work, alongside Picabia, will spark renewed interest in the late Brooklyn native.

“This man deserves a full retrospective of his sculpture, photography, painting, and life’s work,” Schnabel says. “Hopefully this could be a stepping stone to something bigger.”

Man Ray & Picabia will be at Vito Schnabel Gallery, 43 Clarkson Street, New York, from March 25 to May 15.