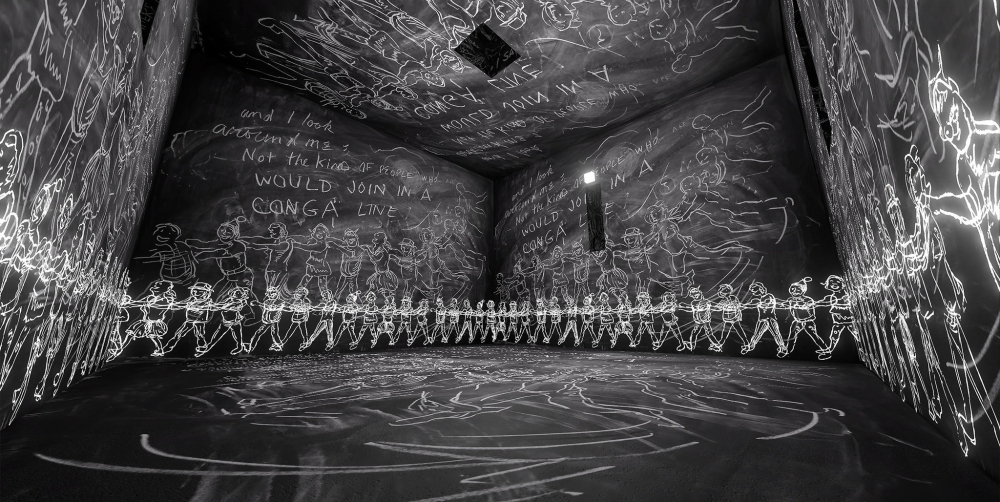 A rendering of what viewers would see with a virtual reality headset while experiencing “Chalkroom,” an installation by Laurie Anderson. Credit: Laurie Anderson

An immersive survey of new and existing works by the performance artist and musician Laurie Anderson is heading to the Smithsonian’s Hirshhorn Museum and Sculpture Garden in Washington next year.

Organized by Mark Beasley, the Hirshhorn’s curator of media and performance art, the exhibition touches on the social, political and personal. Five new large-scale commissions and pieces that expand on previous ideas will fill the museum’s entire second floor.

Ms. Anderson is “somebody who speaks to the issues of our time from many different vantage points and media and genres,” said Melissa Chiu, the director of the museum. “She’s one of the most important voices I think of the 20th and 21st century because of that.”

One of the new works is “Red Flags,” an installation of six flags waved by robotic armlike structures that swing from side to side before abruptly ringing a bell. The idea is that upon entering the show, visitors will hear a call to humanity, one that conveys a sense of alarm.

Among the adapted pieces is the largest version of Ms. Anderson’s virtual reality installation “Chalkroom,” an experience that drops visitors into a space where drawings and words flow through the air and transform into three-dimensional sound sculptures. It was originally created in collaboration with the artist Hsin-Chien Huang and has been shown at MASS MoCA and at Phi Center in Montreal.

Ms. Anderson will also update her multimedia installation “Habeas Corpus,” which was shown at the Park Avenue Armory in 2015. It highlights the story of Mohammed el Gharani, a citizen of Chad and Saudi Arabia who was arrested at the age of 14 and detained at Guantánamo Bay for seven years.

The show will run from Feb. 21 through Sept. 7, 2020, and will be accompanied by a vinyl recording tied to the installations andproduced by Ms. Anderson.