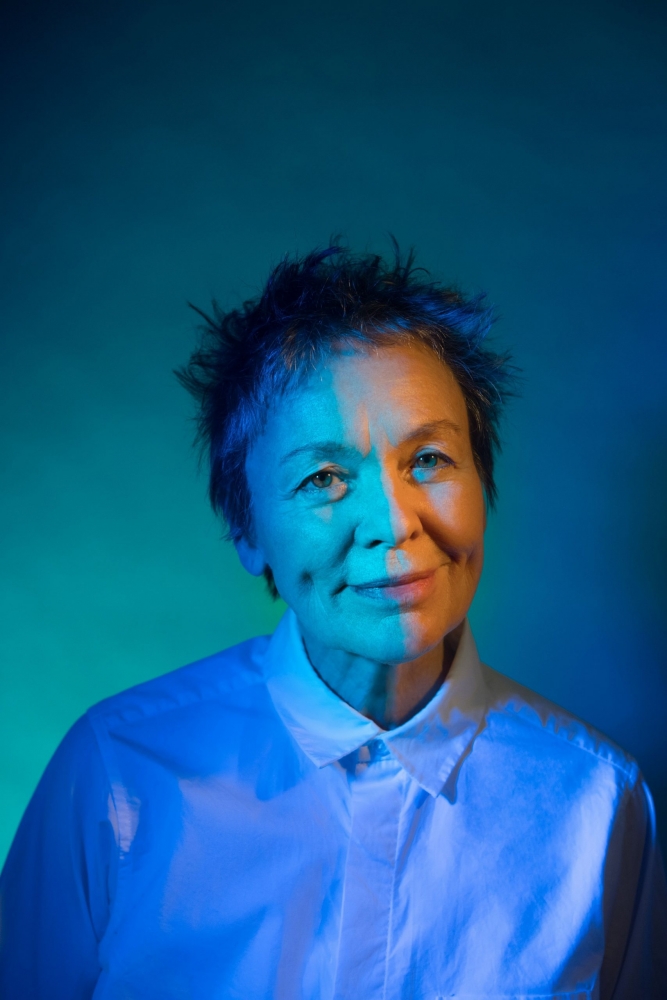 The New York avant garde legend finds herself back in Adelaide to talk natural disasters, artificial intelligence, and finding meaning in a changing world.

“It’s really a wild moment in time right now,” Laurie Anderson says over the phone. “I have no idea what will happen next.”

Anderson is dialling in from somewhere in Adelaide’s nascent tech precinct on Lot Fourteen, where she has taken a few days out from that wild international schedule to become ensconced in the University of Adelaide’s Australian Institute for Machine Learning on Lot Fourteen as its inaugural Artist in Residence.

From her breakthrough performance piece United States Live in the early 80s (which spawned her hit song O Superman) to more recent projects collaborating with everyone from Kronos Quartet to NASA, Anderson’s work has long roamed the boundaries between technology, innovation and expression. Finding the art in artificial intelligence is, on balance, a pretty average Wednesday for the artist.

“We’re in the middle of the AI project, we’ve just started,” she says. “We’re not sure which way it’s going to go but it’s very exciting – we’re working with something called ‘Froyd’.”

An ‘AI self-help guru’, Froyd is a language-based AI that creates some surprisingly coherent, even meaningful auto-generated aphorisms. Its best motivationals are then cherry-picked by humans and, like any self-respecting influencer, posted to Twitter: @froydAL

"The meaning of life as we know it is a great one. It is a place where all things are created and consumed and must be continually transformed."

“It’s like collaborating with the biggest brain you could imagine,” Anderson says. “It’s very, very cool.”

When I confess to only tenuously understanding much of what Anderson has said of the Institute’s work, she is nonplussed. “It’s such an array of things, [that] no one can understand all of that stuff,” she says, reassuring me that this is where the importance of collaboration comes in.

“For me it’s a little bit like working with VR; I do a lot of virtual reality stuff [but] I’m really not able to do the engineering or the programming, and that’s much of the creative work. But without collaboration, most people won’t be able to work with technology, so this is a really unique opportunity that artists have to work with super powerful intelligences and see what happens.

“The head of the department was telling me that much of the heavy lifting is going on in medicine and medical research, but this is a program that gives artists a chance to use some of that power.”

Artists, she says, play an important role in bringing meaning – and humanity – to technological innovation. “I was part of the jury in the Venice [Biennale] VR festival, and saw a lot of very technologically advanced virtual reality pieces, and they were quite amazing, done by very big Chinese teams that were pushing the envelope and doing all sorts of stuff.

“But the jury and I gave the prize to a Nigerian artist who was telling the story of Boko Haram; years ago there were these girls who were abducted from their village and forced into service, slavery,” she says of filmmaker Joel Kachi Benson’s Daughters of Chibok. “He went back through the village, and made a three-dimensional movie. And it wasn’t particularly inventive, but his story was one of talking to the parents of these girls. And he discovered that of the 250 girls [who were taken], 37 of the parents had died from grief.

“He was telling that story, and we were shocked by it. Who dies of grief now? Who loves anybody enough to die of grief? We thought it was the most radical idea of the festival, so we gave him the big prize. Certainly, he used this cool technology to tell the story, but it was the story, the story, the story that we’re interested in, and what is it that can move us as human beings to be more empathetic? You could tell that story with super high-speed technology too, but in this case, the one that really touched me was the parents and the girls.”

This taps into something particularly human, I suggest, the drive to try to understand and make sense of our world. By extension, the technology or tools we create are only as valuable as the extent they help us with that task.

“Exactly, you’ve hit it right on the head,” she says.

“We are the ones who try to make meaning, and I’m not sure if this big system knows what meaning is. I’m not sure if humans know that either, I’ve been in situations where I’ve tried to create meaning out of certain colours, sounds, pictures, words, and then sometimes other people listen to them, for example, and say ‘I don’t know even knows what that means!’ Meaning is elusive, and that’s what we do as artists.

“In this case, that means we get to work with a big machine that lets us find meaning within massive amounts of data, and shift it in new ways.”

Anderson’s 1986 Adelaide Festival performance still invokes an air of reverence from long term festival-goers, and subsequent appearances at the 2013 festival have only cemented the city’s fascination with Anderson’s work. Although nominally drawing from her 2018 book All The Things I Lost In The Flood (a reflection on aftermath of Hurricane Sandy in 2012, which flooded her New York studio space and destroyed four decades of work), Anderson plans to be a little more freewheeling when she returns to an Adelaide stage this weekend as part of the RCC Fringe program.

“But the impetus was also was just these monster events that come into our lives and change everything in a second. That was our monster hurricane, but you know, whether it’s a monster fire or monster plague, we are suddenly having to confront very large things that are changing everything. So it’s kind of about that too.”

After a summer of fires, floods, and now the onset of a global pandemic, it’s a timely line of thinking. Meaningful, even.

“Some of the teachings that I treasure the most are about change, and how it’s important not to hold onto things,” she says, “because you cannot. And also try to establish a kind of equanimity, so you can bear this. I think it’s true to many of my stories, that idea.

“As soon as you do that, your shoulders can drop, and you go: ‘alright, now what am I going to do?’”