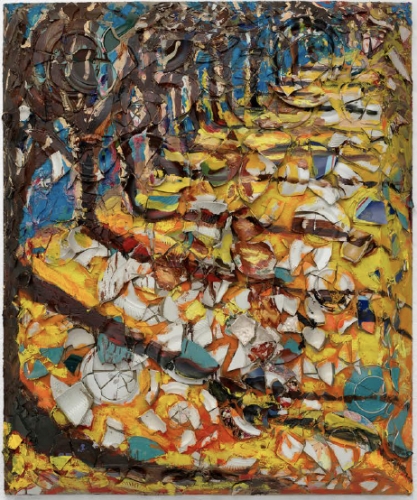 Born in New York in 1951, Julian Schnabel is known in the world of art as well as the world of cinema (of his six films, the first and the last are both wonderful portraits of artists: Basquiat from 1966, and Van Gogh – At Eternity’s Gate, with Willem Dafoe, from 2018). We interviewed him via telephone, and the conversation centered around painting, to which he has dedicated himself for the last 40 years with a technique, among others, that has become his trademark: fragments of plates applied to canvases of grand dimensions, called plate paintings. His latest series of works is currently being exhibited at the gallery of one of his six children, Vito Schnabel, in St. Moritz.

Mr. Schnabel, some artists, for example musicians, do not have to talk about their work, while artists are always asked to. Why do you think that is?

In the film Basquiat, Christopher Walken, dressed as a journalist, asks Jeffrey Wright, who plays Jean-Michel: “Where do you get the words?”, and he responds, “Everywhere. And you, where do you get them?” And then he adds: “Would you ask Miles Davis where he finds the notes?” This is the point. I don’t think an artist should have to explain his work. The artists of the past, those that are not alive anymore, cannot comment on their works, and in fact these are explaining themselves. I believe that today, within art, there are lots of words for different reasons: in part because of the habit of seeing the works in reality, in person, and in part because the artist’s personality cult exists. Oftentimes, political questions add to this. But these questions are misleading, completely superfluous. Useless. Once you begin to give explanations of a phenomenon, you’re talking about reasons and lose sight of the thing itself.

When you paint, how is a typical day at work organized?

At the moment I’m in Switzerland and my house is a few steps from my studio. I start in the morning to make use of the daylight (I never use artificial light to paint) and in general I keep going until it gets dark. When I’m in Montauk [a seaside resort at the end of Long Island] I follow the same routine, but I prefer to start after lunch because the light changes during the course of the afternoon. Two assistants help me, they prepare the canvases with the ceramic fragments on which I paint.

What was the moment in which you realized that you could live exclusively with painting?

The period between 1975 and 1979, when I was 25-30 years old, was an incredibly fruitful time, and therefore fundamental. Experimenting with various techniques and materials, I actually discovered the foundation of the pictorial language that then became mine, and which includes, still today, a sculptural component, material, very pronounced. is actually a painterly, figurative element. The first “plate painting” is from 1978, The Patients and the Doctors.

Why is this the title?

Well, I spent a lot of time reading Antonin Artaud, who among other things wrote a book on Van Gogh, The Man Suicided by Society. The thought inherent in the title is fundamentally a question: who is the doctor and who is the patient?

Your most recent series of works, Trees of Home (for Peter Beard), was born from a long friendship.

Peter and I [American photographer born in New York in 1938 who went missing in Montauk in 2020] were friends for almost a half a century. Like myself, he loved Van Gogh. After seeing my film, one day when he was really sick and I had gone to visit him at his house, he had wanted to show me a book with images of the trees in front of the asylum where Vincent was recovering for a year, but he couldn’t find it anywhere. Unfortunately, he died unexpectedly the following April, and so it was his wife who gave me the book, with his notes on the images. That was the reason for this series of paintings that represent these trees.

Van Gogh has occupied an ample portion of your time and your thoughts: has he also influenced your way of painting?

Without a doubt. I painted portraits of Willem Dafoe in Van Gogh’s clothes many times over for the film. Vincent continuously repainted his subjects, and that’s what I did as well. At one time, when I was asked if my films influenced my painting, I responded no, but now I believe that there is a mutual exchange, that it all is a part of the same practice.

What do you think Julian Schnabel has contributed to painterly language?

That is something for others to decide…we could ask my wife, for example? [Julian laughs]. It’s like having to explain a tongue twister. Let’s leave it at that. If you look at the paintings of different artists over the course of the centuries, you see that even when the formal languages among them seem very different, there are similarities. I believe that an artist’s contribution can be identified herein: in the creation of new forms of expression that continue the dialogue initiated by his predecessors, and that pave the way for those who come after them.

In the gallery and at auction

Titled Trees of Home (for Peter Beard), the most recent series of paintings by Julian Schnabel, is exhibited at Vito Schnabel Gallery in St. Moritz (www.vitoschnabel.com) until April 4th with prices ranging from 500K to 600K dollars. At auction, the record for his painting, Ethnic Type (1984), was at the hammer price of 1’226’780 Euro at Christie’s New York in November 2017. Also in New York, in November 2018, Sotheby’s sold a painting from 2015 from the series Rose Painting (near Van Gogh’s grave), like the one published at the beginning of this article, for 1’074’790 Euros, whereas the plate paintings from the 80s sell at auction for prices between 100K and 900K Euro.