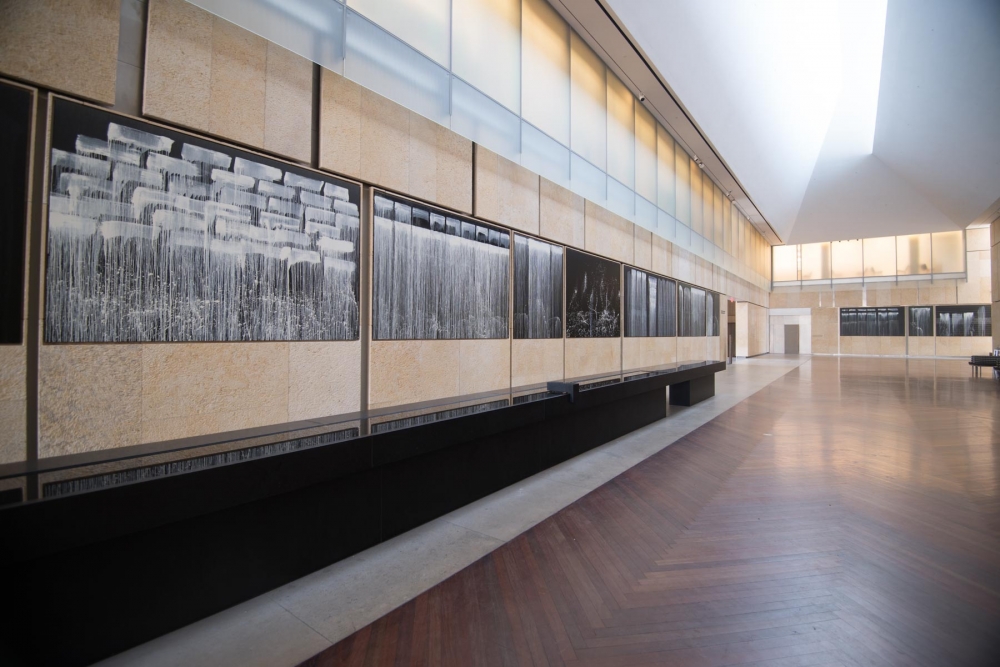 Pat Steir began making her remarkable, lush abstract paintings more than 30 years ago. To execute two series that are referred to as “Waves” and “Waterfalls,” she adopted a decidedly untraditional approach. She pours as well as drips and flings fluid oil pigments of various viscosities in multiple layers down the surfaces of upright, primed linen canvases. Consciously avoiding any temptation to create deliberate compositions, Steir does not apply brushstrokes to her work to realize recognizable imagery, instead letting chance guide her process. Since she began working this way, her paintings have attracted legions of admirers.

At 81, Steir has been enjoying a banner year. This past winter, the artist installed a commission of 11 site-specific black-and-white paintings at the Barnes Foundation in Philadelphia. Weeks later, she opened a solo show a few blocks away at the Locks Gallery, one of her longtime dealers. Meanwhile, for dance performances in Paris, Brooklyn, and Los Angeles, she conceived an electronic backdrop to help celebrate what would have been Merce Cunningham’s 100th birthday. At Lévy Gorvy, her New York gallery, she has curated “Visible Traces (Mountain Water Air),” a refreshing summer show with some of her favorite artists that runs until August 10. There are contemporary and historical paintings, sculpture, works on paper, prints, and embroidery by the likes of Agnes Martin, Joan Jonas, Terry Winters, Mary Heilman, Stanley Whitney, Sol LeWitt, and the Japanese 19th-century masters Hokusai and Hiroshige. This coming October, she will be exhibiting along the inner circle of the second floor of the cylindrical Hirshhorn Museum in Washington, D.C., 28 paintings, each measuring 7 feet by 9 feet, that will form a vast color wheel comprised of red, orange, yellow, green, and blue.

Steir is often asked to describe how she makes her art. In a film about her work released a few months ago, she reiterated how, “My idea was not to touch the canvas, not to paint, but to pour the paint and let the paint itself make the picture.” Consequently, there are days when she enters her studio in an industrial space in Chelsea overlooking the Hudson River and is surprised by how her work looks after it has dried. Even though she knows something like this will happen, it’s never the same “because,” she recently told me, “different pigments have different weights.” “The paint,” she pointed out, “changes while it moves.” In the end, “It’s gravity that makes the image.”

Steir was only 26 when she had her first solo show, in 1964, at the then-highly-regarded Terry Dintenfass Gallery. Over the course of the next two decades, she mounted many one-person exhibitions, with dealers in New York, New Orleans, Paris, and Geneva, among other places, and participated in important group shows at the Museum of Modern Art and the Whitney Museum in New York and the Corcoran Art Gallery in Washington, D.C.

Along the way, Steir met scores of other artists—in Manhattan’s Little Italy, where she first lived, through teaching on both coasts (at the School of Visual Arts in New York and the California Institute of the Arts), as a co-founder of nonprofit art bookstore Printed Matter, and as a board member of Heresies, a feminist journal. Her circle has been expanding for decades, to include friends and colleagues of all ages. Brice Marden was a classmate at Boston University more than 60 years ago; Philip Guston was her teacher at Pratt in Brooklyn, where she graduated with a MFA in 1962. Her students have included David Salle, Ross Bleckner, and Amy Sillman. In 1973, when she was teaching at CalArts, she and LeWitt became a couple. Since 1984, she has been married to the graphic designer Joost Elffers.

It was not until Steir was in her mid-40s, in the early 1980s, that she found her métier. At the time, she divided a poster of a still life by the Flemish artist Jan Brueghel the Elder into 64 panels to paint what she called The Brueghel Series (A Vanitas of Style). In each rectangle she painted part of another artwork from the past that related to the color and the space of the individual segment. She subsequently began to mine the history of art for ideas and imagery. Though it took Steir three years to complete this conceptual project, she doesn’t regret one minute of it. As she told me recently, “I gave myself an education.”

While engaged with the “Brueghel Series,” Steir discovered Japonisme, which led her to learn about Chinese literati painting. That’s when it came to her that she didn’t need to apply paint with a brush to her linen surfaces. Soon came the shimmering “Wave” works, followed by the “Waterfalls.” But as she sees it, she isn’t “making an abstract painting.” She even riles at the term, preferring to call her own art “non-objective.” And she has definite ideas about what the Abstract Expressionists were doing. “I’m not after the same thing,” she said to me. According to Steir, “They wanted to spell out what viewers saw. They were trying to make an impression.” She believes the Abstract Expressionists were essentially landscape painters. When she applies red to one of her canvases, she feels she is making a work about red paint.

And then, there are Steir’s intriguing notions about color itself. She forthrightly declared, “I’m not interested in color painting.” “If anything,” she said, she makes “conceptual art.” You might say that she uses a multi-hued palette the way Robert Ryman wielded white.

But as much as Steir likes to experiment freely in what she calls a “collaboration with Mother Nature,” she strictly abides by a number of rules. She does not crop her canvases, nor turn them. She also doesn’t mix her colors. After applying a bottom layer of green so that her pigments won’t soak into the linen, she patiently applies her paints one layer at a time. They tend to dry slowly, the speed varying depending on temperature and air currents. As the layers interact, the topmost one changes from its initial appearance.

Asked recently when she had realized that she had found a way to create infinite variations in her paintings, she replied, “I knew from the beginning.” She laughed as she remembered how “someone at the time said, ‘You’ve painted yourself into a corner’; and I said, “Wait and see.”

© 2019 ARTNEWS MEDIA, LLC. ALL RIGHTS RESERVED. ARTNEWS® IS REGISTERED IN THE U.S. PATENT AND TRADEMARK OFFICE.