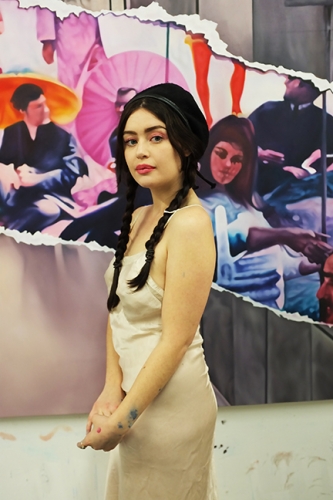 After her solo show opening this weekend at MAMA gallery in Los Angeles, artist Ariana Papademetropoulos might make a film about killer mushrooms that murder young punk kids. This should give you an idea of her creativity – it's a boundless creativity that bursts with schizophrenic, hallucinatory imaginativeness. Her paintings literally split at the imaginary seams, tearing into new images – half hidden sadomasochistic scenes are obscured by foggy veils, and midcentury living rooms peel into wood paneled dens where shadows portend dark and dangerous things. There is a Freudian element - her paintings feel like repressed memories, places where we were abused and aroused, places where we learned about our sexuality; places where past lives lived, made love and died under unknown suns. In her work, the hippocampus unfurls like a beautiful prismatic flower and drips with vibrant eroticism. It's truly electrifying. You can see many new works this weekend at one her first major solo exhibitions in Los Angeles – a small house will be built that will make her paintings come to life. We got a chance to visit Papademetropoulos in her studio to discuss her work, her life growing up in Los Angeles, and her new show, Wonderland Avenue.

OLIVER KUPPER: Did growing up in Los Angeles inspire your work?

ARIANA PAPADEMETROPOULOS: Yeah, in a way, I guess without me really wanting it to. It kind of seeped in. I’m from here. I kind of grew up in Pasadena. My dad lived in Venice. I moved back and forth between those two worlds.

KUPPER: It’s hard not to be fascinated by Los Angeles

KUPPER: There’s always something dark going on. Even in Beverly Hills.

KUPPER: When did you know that you wanted to become an artist? I read somewhere that your parents encouraged you at an early age. Was there a defining moment?

PAPADEMETROPOULOS: Not really. I think it was just the only thing I ever did, since I was literally a kid, which sounds cheesy.

KUPPER: Was there a moment when you knew that you were going to do it for the rest of your life, or was it natural?

PAPADEMETROPOULOS: That was just the only thing I did.

KUPPER: And your parents encouraged it?

KUPPER: So you were around a lot of creativity?

PAPADEMETROPOULOS: Yeah. It was very natural.

KUPPER: Did you know it was going to be painting, or were you ever working with other mediums?

PAPADEMETROPOULOS: I think it was always painting. I would love to do other mediums as well. I would love to move into installation. I’d like the works to get bigger and bigger – to envelop you in a sense.

KUPPER: To take on a life of their own?

KUPPER: And your parents never wanted you to do architecture?

KUPPER: You’re part of this really exciting art scene in LA that has started to grow, especially among female artists. Do you find strength in this collective energy?

KUPPER: Do you feel like there’s a creative energy in LA going on that’s stronger than it’s been in the past?

PAPADEMETROPOULOS: Totally. Everyone is moving here. I just don’t exist in any realm. There’s a lot of cool stuff going on. It’s a good time to be in LA.

KUPPER: When did you start developing your style?

PAPADEMETROPOULOS: I’ve been painting in a similar way since I was like fourteen. I was really into the style of vintage clothes. There was this one dress that had airbrushed flowers and patterns on it. One of the backgrounds of my painting, I copied the fabric from the airbrushed dress that I wore. That started off the whole thing. A lot of people think my paintings are airbrushed.

KUPPER: But it is brush work?

KUPPER: Amazing. Do you start with the image and work backwards towards obscuring distorting it?

PAPADEMETROPOULOS: I create the image first and then distort.

KUPPER: So the image is underneath it the whole time?

PAPADEMETROPOULOS: There’s no mystery. There is, but not really. Everything is kind of disgusting.

KUPPER: What is the symbolism behind the distortion of the work?

PAPADEMETROPOULOS: In a sense, I’m interested in creating images that trigger the viewer’s sense of psychology. All images do this. I think when images are in limbo, they can be perceived in more than one way. That, to me, is more interesting to me than giving it to you all at once. I try to make things to inspire the view to use their own imagination.

KUPPER: It seems like an alternate reality. You could peel the surface off to reveal something more.

PAPADEMETROPOULOS: I’m really into that. I think most of my paintings have a layer of separation. There’s a double layer. This makes the images seem more tangible to me. The thing on the other side might be real, because there’s a barrier that’s separating our reality from that one.

KUPPER: It brings to mind Magritte’s philosophy of the treachery of the image. Ceci n’est pas une pipe. The image is something else entirely. That deals a lot with psychology. It’s interesting related to the time period of the images you’re working with. In mid-century film, you would have these split images, and your whole perception of things is skewed.

PAPADEMETROPOULOS: Yeah. When you’re watching a film, you are in the film. Similar things have been coming up a lot in my work.

KUPPER: Do you spend a lot of time sourcing your images? You probably dig deep to find them.

KUPPER: How long does this process take?

PAPADEMETROPOULOS: It depends on what kind of deadline I’m under. I’ve done this whole show since January, which is kind of nuts. I haven’t left my studio. I work like 16-hour days, just going nuts.

KUPPER: Is that ideal? Do you like that pressure?

PAPADEMETROPOULOS: I’d like to have a little bit of room. But this is how I always seem to work, always at the last moment. I’m used to it.

KUPPER: It’s an interesting juxtaposition – to be rushed, but also to have to be so meticulous.

PAPADEMETROPOULOS: Yeah. That’s something I’ve learned – to never rush. If I rush, it will take me longer, in the end. But if I just zone in and do it right, it’s fine. I never try to rush. I just get lost in it.

KUPPER: Do you apply any practical theory to your work? Classical training?

PAPADEMETROPOULOS: No, not really. I just use turpenoid. I don’t know how to use anything else. I’m really into rabbit skin glue. That’s what I put on the canvas. It’s literally pulverized rabbits. You have to get the powder and put it in the pot and boil it. They’ve been doing it since the Middle Ages. The rabbit’s skin glue is clear, but it’s sparkly. It’s magical.

KUPPER: Where do you get rabbit’s skin glue?

PAPADEMETROPOULOS: Just at the art store. I like the idea that pulverized rabbits make sparkly glue.

KUPPER: Your upcoming show, Wonderland Avenue, was the title based off those murders from the '80s?

PAPADEMETROPOULOS: Yeah, but it embodied all my ideas about Los Angeles, in a sense. I wasn’t super keen about it being about the Laurel Canyon murders. But it made sense in my ideas about spaces, how they change over time. For example, that house where the murders occurred, the Wonderland Gang lived there. But before that, Paul Revere and the Raiders lived there, a psychedelic band. That street was '60s, with the Doors and this band and that band. It was this magical utopia. And the name itself – “Wonderland Avenue.” In Los Angeles, especially in Laurel Canyon, we have all of these street names that are like Disneyland. I’m interested in how Los Angeles becomes itself. The newspaper would say, “Oh, LA, where all the movie stars go!” even though there was nothing here. So people came with this idea, and then it was created. History intertwines itself. Fact and fiction interplay.

KUPPER: It’s very manufactured. That name sums up a lot. It’s a great title for a show.

PAPADEMETROPOULOS: My work is kind of magical, in a sense. I don’t want to say that, but the palette has a magical quality to it. It’s both light and dark.

PAPADEMETROPOULOS: I think it’s a natural thing. Women are the most beautiful things. Of course I’m going to want to paint them. I strayed away from painting people for a long time, because I felt like I had to get away from portrait. But I like putting them in these different situations, like the woman with the plastic on top.

KUPPER: What’s next after this?

PAPADEMETROPOULOS: I don’t know yet. There are a couple of art fairs that I’m supposed to do. I’m probably going to take a break. I’ve been talking about making this film for four years, and I’m finally doing it.

KUPPER: Can you talk about the film at all?

PAPADEMETROPOULOS: It’s kind of hilarious. It might not be a film; it might be more like a picture book. The movie is about a killer mushroom who murders all these young punks. It’s all my friends, and everyone has a role that’s exactly for them. One of my friends delivers the boys to the mushroom in exchange for snacks. She doesn’t understand that the mushroom is killing these people. But the mushroom isn’t killing them; she’s just turning them into plants.

KUPPER: Is it going to be a feature or a short?

KUPPER: Are you shooting it on film?

PAPADEMETROPOULOS: I’m still wanting to make a book out of it instead, a bunch of photographs telling a story. Kind of in the same way of a comic book. It’s like a graphic novel but with photographs. All my friends are like, “You have to make a movie.” I might try to do both.