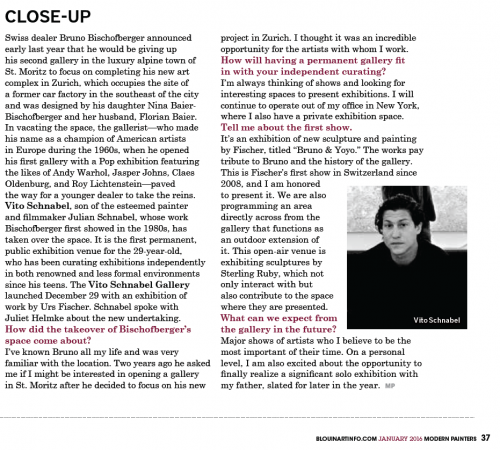 Swiss dealer Bruno Bischofberger announced early last year that he would be giving up his second gallery in the luxury alpine town of St. Moritz to focus on completing his new art complex in Zurich, which occupies the site of a former car factory in the southeast of the city and was designed by his daughter Nina Baier-Bischofberger and her husband, Florian Baier. In vacating the space, the gallerist—who made his name as a champion of American artists in Europe during the 1960s, when he opened his first gallery with a Pop exhibition featuring the likes of Andy Warhol, Jasper Johns, Claes Oldenburg, and Roy Lichtenstein—paved the way for a younger dealer to take the reins. Vito Schnabel, son of the esteemed painter and filmmaker Julian Schnabel, whose work Bischofberger first showed in the 1980s, has taken over the space. It is the first permanent, public exhibition venue for the 29-year old, who has been curating exhibitions independently in both renowned and less formal environments since his teens. The Vito Schnabel Gallery launched December 29 with an exhibition of work by Urs Fischer. Schnabel spoke with Juliet Helmke about the new undertaking.

How did the takeover of Bischofberger’s space come about?
I’ve known Bruno all my life and was very familiar with the location. Two years ago he asked me if I might be interested in opening a gallery in St. Moritz after he decided to focus on his new project in Zurich. I thought it was an incredible opportunity for the artists with whom I work.

How will having a permanent gallery fit in with your independent curating?
I’m always thinking of shows and looking for interesting spaces to present exhibitions. I will continue to operate out of my office in New York, where I also have a private exhibition space.

Tell me about the first show.
It’s an exhibition of new sculpture and painting by Fischer, titled “Bruno & Yoyo.” The works pay tribute to Bruno and the history of the gallery. This is Fischer’s first show in Switzerland since 2008, and I am honored to present it. We are also programming an area directly across from the gallery that functions as an outdoor extension of it. This open-air venue is exhibiting sculptures by Sterling Ruby, which not only interact with but also contribute to the space where they are presented.

What can we expect from the gallery in the future?
Major shows of artists who I believe to be the most important of their time. On a personal level, I am also excited about the opportunity to finally realize a significant solo exhibition with my father, slated for later in the year.