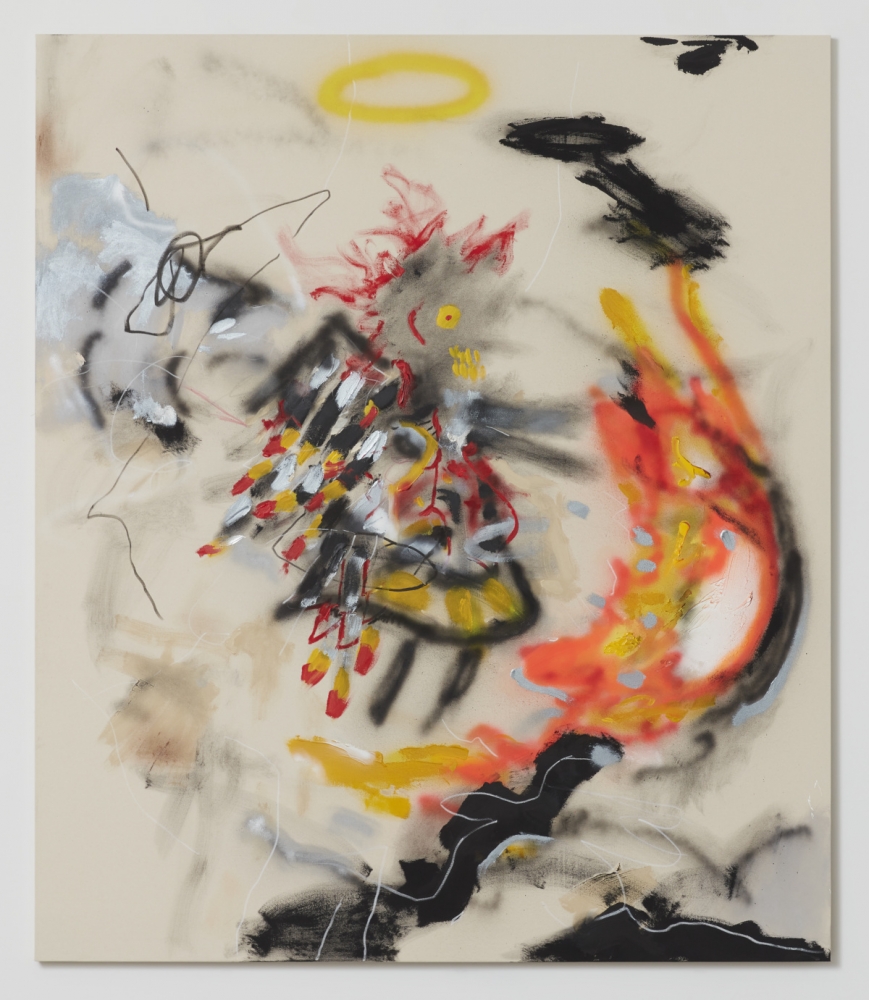 With a fascination for the mythical and a penchant for scribbles, the Brooklyn-based artist prepares a new body of paintings for his first solo show in New York, opening February 25.

A few wings may flutter and a few harps may sing when artist Robert Nava opens his show of new paintings at Vito Schnabel Gallery later this month. Under the title Angels, this body of work explores the inexhaustible variations of those celestial beings, giving form and fanciful specializations—Night Storm Angel, Gold Sky and Wind Angel, Asteroid Maker Angel (all 2020)—to a religious symbol oft-explored in the history of art.

Nava has a longstanding interest in fantastical and mythical subject matter—witches, monsters, beasts and knights—so this latest chapter is not entirely a surprise. “I think I’m attracted to the mystery [of this material],” he tells me. “Sometimes I find it comforting that I don’t know the answer, that I don’t understand what everything on this Egyptian tomb means. But from the look of it I can see the integrity of care.” In addition to this combination of “mystique and seriousness,” he says, “some of it—and this is just me getting into my kid side—is just badass.”

Getting into his kid side is, in fact, a central piece of Nava’s approach: “As a kid I was just attracted to this stuff—imagination and fantasy—and I try to keep it alive as an adult.” His style likewise seeks to capture a kind of naïve intuitiveness. In a rapid primitivist scrawl, his figures look like they could have been torn from the pages of a child’s drawing pad or the margins of a daydreaming high school student’s notebook. “A scribble can have the same seriousness or weight as any other kind of mark making,” he offers, and then cites Cy Twombly, who said, “My line is childlike but not childish.” Although it can be fun to make works like these—”not all the time,” he assures me—”they’re handled with care.” Put otherwise: “I want to be a really, really good scribbler.”

Nava speaks about the creatures that populate his canvases at times as if he weren’t necessarily in control of them. Of the origins of the angel paintings, he tells me, “I had a studio that was filled with all these monster paintings that I was working on. And the first angel happened a little by mistake and a little bit as some kind of hero to stand up to those.” That initial hero was soon joined by others: “I got into a rhythm where maybe every four or five paintings it was time for another angel,” he says, before they finally took over the studio’s subject matter. Though the first were seemingly champions, the line between good and evil is not always so clear. “The angels taught me that they’re not all good,” Nava says, turning his preliminary childlike reading of the work on its head. “And then you start thinking, ‘are some of the monsters good?’”

Art history, of course, is not short on angels. To my mind Nava’s evoke—among other sources—Byzantine icons and, perhaps most of all, Paul Klee’s Angelus Novus (1920), which critic Walter Benjamin famously deemed the “angel of history,” blown backwards into the future by the endless piling-up of catastrophe upon catastrophe. Although Nava is wary of projecting the agonistic battle of his studio walls onto the world spirit, he says, “maybe it is time for something like that.”