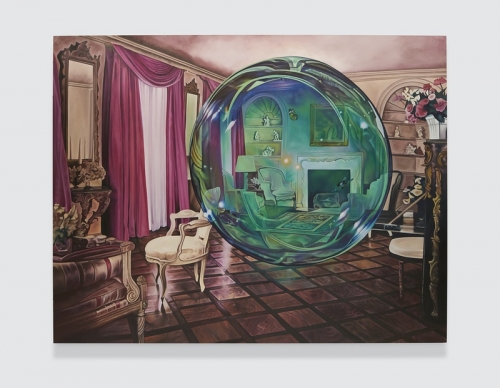 An orange creamsicle-colored carpet lures visitors to Vito Schnabel Gallery into another realm—that of Unweave a Rainbow, LA-based artist Ariana Papademetropoulos’s current exhibition on view at the gallery’s New York space. The plush room is sensual and juvenescent, complete with six paintings and two modular sculptures of rainbow-hued velvet cushions placed on the floor to be utilized and rearranged. Entering the magical realism of Unweave a Rainbow is sensationally transformative even before considering the magnificent paintings on view.

The exhibition’s title comes from the John Keats poem, “Lamia” (1820), in which he laments how Sir Isaac Newton’s scientific explanation for the rainbow’s color arrangement spoils its spellbinding allure. Like pulling back the curtain mid-magic trick, disillusionment can be harsh. Keats mourns the loss of mystical phenomena to cold science, and so Papademetropoulos’s exhibition functions as an entry point into the disruption between fairy tale and reality. In reference to science’s imposing affront to mysticism, the road to discovery can be a complex one. Unweave a Rainbow invokes comparisons to The Wizard of Oz (1939), another world where dreams converge with reality and whimsy is as rewarding and clarifying as anything tangible.

On another note, the paintings present an unexpected but strong connection to the current social and emotional climate. They are fantastical interiors and landscapes with bubbles of domestic and residential environments floating in the foreground. Like hovering soapy globes, these self-contained worlds-within-a-world are sublime and strange with a vanished human presence and sense of timelessness. The visions contain psychological states that are all too familiar: isolation, curiosity, and uncertainty. Although the body of work on view in this exhibition was created in 2020, the year synonymous with the concept of a bubble, it is a logical extension of the work she has been exploring—alternate realities, surrealism as a conduit to understanding domesticity—well before we were quite literally forced to confront the idea of existing within a self-contained sphere.

One of the most powerful and lingering conversations of the exhibition lies in Papademetropoulos’s conjunction of the vying definitions of the bubble: isolation and effervescence. In Curse of the Boys with Butterfly Tattoos (2020) she takes a seductive living room outfitted with ornate furniture and elegant drapery and renders it eerily quiet, as though the occupants of the room have abandoned it in haste and left a pair of fluttering butterflies in their stead. Two floating golden orbs push the space into a supernatural realm. Within the iridescent rainbow surface of an oily bubble in The Shadow of Clouds (2020), the artist presents a similarly lonely interior space, this time over an empty snowy landscape. The vastness of the mountain’s peak juxtaposed with the claustrophobia of the bubble’s smallness is balanced by the former’s uninviting frigidity and the room’s enticing luminescence.

Stylistically, the paintings bring to mind the fanciful works of Odilon Redon, who, over a century before Papademetropoulos, was creating similar Symbolist scenes with dreamlike motifs and nods to mythology. Redon’s description of his artistic aspiration—“to place the logic of the visible at the service of the invisible”—can be applied to Papademetropoulos’s collection of work on display. That is to say, Papademetropoulos’s presentation merges familiar emotional states depicted through rational and recognizable domestic motifs with an underlying sense of mystery. Therein lies the tension and pull of the work. Absorbing these contained environments within another built space, we are pressed to consider our own self-constructed freedoms and limitations. The resulting emotional tugs are both heavy and surprisingly stimulating.

Three smaller paintings continue merging the rational with illusion. Death of a Mermaid, Spying on Zeus was never a good idea, and Keira (all 2020), personify a natural object—a conch shell, crystalline formation, and flower respectively—with a single human eye. The symbolic omniscience evokes the Cyclops or an all-knowing seer and implies the human compulsion toward mythology-creation alongside an urge to know the truth, no matter how undesirable it may be. Here, Papademetropoulos dares us to pretend we don’t live in both worlds simultaneously.

In “Lamia,” Keats posits, “Do not all charms fly / At the mere touch of cold philosophy?” and continues, “Philosophy will clip an Angel’s wings, / Conquer all mysteries by rule and line.” In her version of Unweave a Rainbow, Papademetropoulos encourages visitors to explore and relish the warmth of the unknown. Like the moment when Glinda the Good Witch makes landfall within her bubble and brings hope to Oz, Unweave a Rainbow feels like a pleasant escape, if still a little unsettlingly bizarre.

Contributor
KATHLEEN HEFTY is a writer based in New York City.