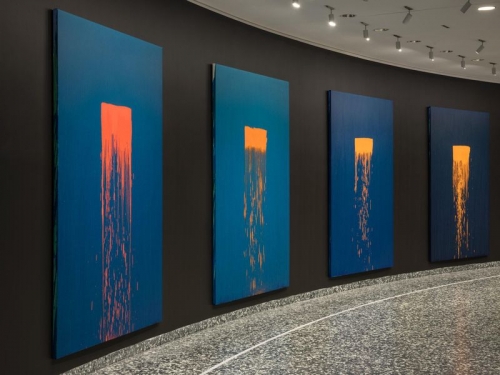 In the Installation Color Wheel, the color of the gestures on each canvas are complementary to the background color
(Alex Munro, Hirshhorn Museum and Sculpture Garden).

A new immersive installation investigates colors and their relations

Pat at Steir’s color wheel is not the flat, carefully measured disk used to teach children the difference between primary and secondary colors. It’s an immersive, larger-than-life collection of 30 canvasses, each dressed with layers of paint rich in texture and vibrancy. Each canvas seems a masterpiece in and of itself, but as one traverses the circular hallway where they are hanging, the full wheel is revealed, taking the viewer on a journey through a rainbow of Steir’s design.

“Pat Steir: Color Wheel,” which recently opened at the Smithsonian’s Hirshhorn Museum and Sculpture Garden, is a piece the museum commissioned to make use of the building’s iconic circular form. (Designed by the Pritzker Prize-winning architect, Gordon Bunshaft, the Hirshhorn has been playfully referred to as a “Brutalist donut.”) At 400 linear feet and traversing the inner circle gallery, Color Wheel is Steir’s largest site-specific installation to date.

“My thought was, why not give her this space and see what she can do?” says Evelyn Hankins, senior curator at the Hirshhorn, who oversaw the show. “She’s at a point in her career where she was ready to create a really large, important project.”

For more than 40 years, Steir has made abstract paintings using the signature technique she employs in Color Wheel. To create her works, Steir vertically mounts her canvases and standing on the studio floor or a ladder, pours or throws the paint. Using a dripping technique, she says, is not “macho enough” for her, preferring instead to fling it with powerful strokes or pour it deliberately. Oftentimes, after a day of working on a canvas, she says she returns to the studio the next morning impressed and surprised at how the paint settled.

“By pouring or throwing the paint, I take myself out of the painting. But there’s always intention in setting limits,” Steir says. “I’m not totally out of it, but I’m not using it to express myself. I really believe that if you’re looking for a means of self-expression, you should see a therapist. That’s not the purpose of art.”

Inspired by artists like John Cage and Merce Cunningham, Steir heavily considers the role of chance in creating her work, surrendering some control to the force of gravity on the paint’s path. Rather than limit her artwork to specific imagery, she relies on abstraction, opening it up to the viewer’s interpretations. Still, she doesn’t label her paintings solely as abstractions nor figurative pieces. For instance, though her acclaimed “Waterfall” series are non-pictorial, they draw on Japanese landscape brush paintings whose depictions of cascading water resembles the flow of paint on Steir’s canvases.

“The willingness to open up the paintings for figurative references is okay,” Hankins says. “That’s why she called her paintings ‘waterfalls’ for so many years. If she was going to be an artist who had said, ‘I only make abstractions,’ she would have shut down the possibilities through her use of titles.”

In Color Wheel, though each canvas is merely one component of the collective work, they are uniquely nuanced. “They are all the same and not alike,” Steir says.

Originally created by Isaac Newton, the color wheel is a traditionally scientific illustration of the way different hues relate to each other. Steir nixes science to craft a wheel that reflects her own perception of color. Her version orders canvases washed with the primary color transitioning from red to purple counter-clockwise around the viewing space. The color of each canvas is juxtaposed with a swipe of its complementary color, the excess of which drips down in bright strands.

To create the perfect hues, Steir began by painting her canvasses with a green color that she says pushes light out, much like sepia tones in old photographs do. Onto the canvas she poured between four and eleven layers of oil paint which are made nearly transparent with thinners and binders. The canvases are left unframed, the sides baring evidence of the work’s many paint layers.

As with every exhibition, this one posed unique challenges. The circular gallery was not constructed to exhibit paintings, so the curatorial team had to make dramatic changing to the lighting, including blacking out excess light from the gallery’s interior windows and adding light fixtures. In a last-minute addition, Steir decided to include two black and white canvasses to bookend the piece.

“We will do whatever we can to realize the artist’s vision as long as we’re able to,” Hankins says.

At the age of 79, Steir still spends most days working in the studio, coloring her canvases with the help of her assistants and an automated forklift (she stopped using a 10-foot ladder after a fall in her kitchen last year).

And, Hankins adds, it’s a treat to show the work of such a monumental artist. “She’s the real deal.”

“Pat Steir: Color Wheel” is on view at the Hirshhorn Museum and Sculpture Garden through September 7, 2020