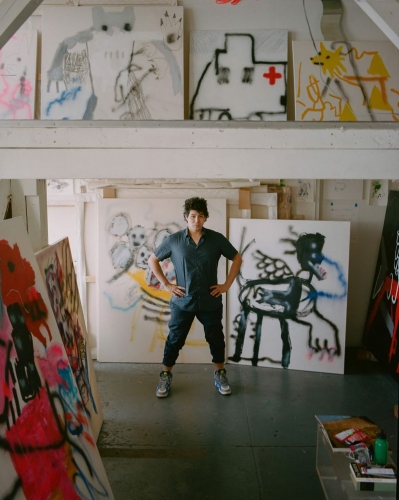 Robert Nava admits he has always struggled with artistic rules. While working towards his bachelor’s degree in fine art at Indiana University Northwest, the East Chicago native said his introductory painting classes were focused on drawing realistically. But copying things and drawing straight lines wasn’t natural for Nava. “Breaking the rules,” on the other hand, felt much better to him, so he eventually went in the opposite direction. He discovered that drawing something completely “wrong” was much more interesting.

Currently, Nava has work in three galleries: Night Gallery in Los Angeles; Sorry We’re Closed in Brussels; and V1 Gallery in Copenhagen. In January, GQ Style called him a “rising star.” Another recent highlight was when fashion supermodel Gigi Hadid wore a suit emblazoned with one of his paintings to a Paris Fashion Week show in June.

In a recent interview to talk about his upcoming October 21-22 visit to IU Northwest, where he will serve as a visiting critic, Nava reflected on his journey through his undergraduate degree, onward to graduate school, and eventually into art galleries around the world. He is now living in Brooklyn and supporting himself exclusively through his art. After he graduated from IU Northwest in 2008, Nava took a semester off to build a portfolio. He wanted to apply to graduate school, but he needed some solid work to bolster his applications, so he took advanced painting for another semester. To make ends meet during that gap year, Nava worked at a gym, drove an ice truck, worked security at a bar, and helped a friend move copy machines up and down stairs. During the hours in between, he visited IU Northwest’s studios, and created a portfolio that would ultimately land him at Yale University School of Art in Connecticut.

After earning his Master of Fine Art (MFA) in Painting from Yale in 2011, Nava managed to sell a few of his pieces. That money got him to New York, but it quickly ran out and he found himself searching for work. He began driving a moving truck in New York City. “That was my rent. That was survival mode,” he said. “There weren’t very many (gallery or art) shows for the first couple of years out of school, and they were little shows, like out of garage spaces. Early on you kind of have to say ‘yes’ to everything.” Nava committed to drive the moving truck for a solid 10 days straight so he could knock out his rent payment. The rest of the month, he was free to let the ebbs and flows of his creativity guide him.

The moving trucks in his life, and the visuals that surrounded him during those years, fueled his inspiration. “I cannot remember if the inspiration came from sitting in traffic or not, but seeing the backs open originally gave off this feeling of a portal,” he said. “From there, other things became more visually apparent, like faces, masks, words and signage, graffiti, colors, dirt, rust. The trucks are often abstracted, or personified until they become something else. They are more like trucks as gods.”

Nava hopes to keep up his current pace of moving his body of work “in exciting ways.” “Museums would be really nice,” he dreams. “I also have a dream studio and future shows in my mind. They just aren’t painted yet.” Until the next opportunity, Nava continues to work with the rhythm that works for him. Blasting his music in the early mornings, sometimes he produces nothing at all. Other times, he jousts with three paintings at a time. Sometimes, after a long dry spell, he cranks out several in one day.

People have said to him, “You’re living your dream, you know that, right?”

What: Born in East Chicago, New York-based artist Robert Nava earned his B.F.A. at IU Northwest and later, an M.F.A. at Yale University in 2011. As described in a GQ magazine artist profile, Nava’s “primordial monsters and myths balance ceremonial seriousness with childlike play.” Nava’s work deals with the absurdity, and the extreme. At the same time, he presents work that is humorous and gestural.