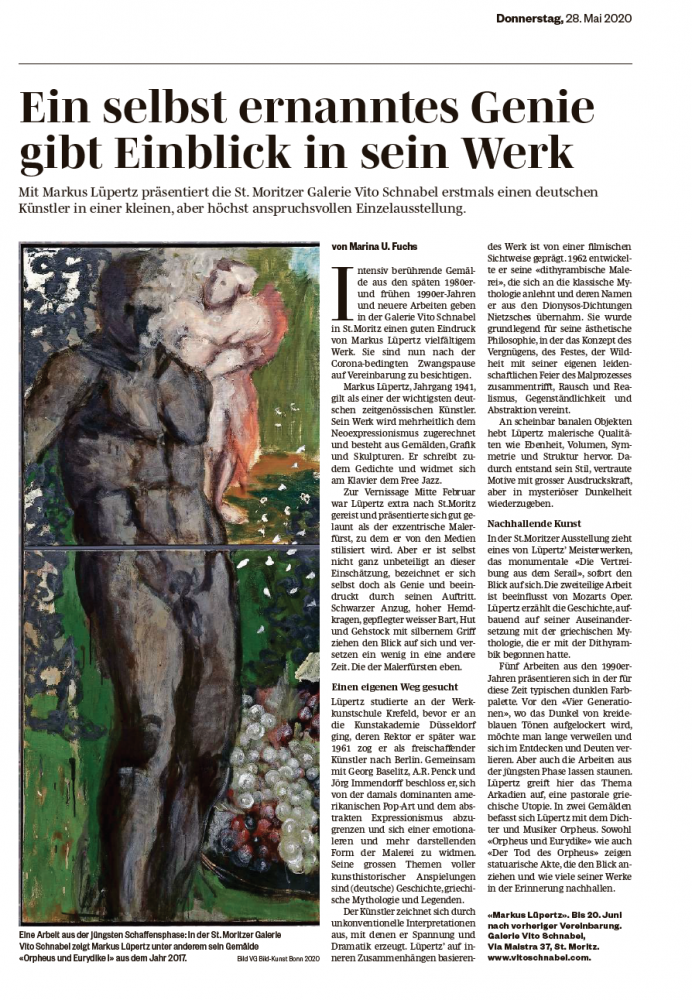 For the first time, Vito Schnabel Gallery in St. Moritz presents a German artist – Markus Lüpertz – in a small but sophisticated solo exhibition.

Intensely moving paintings from the late 1980s and early 1990s, and newer works, provide a good impression of Markus Lüpertz’s diverse oeuvre. They can now be viewed by appointment following the break mandated by the Coronavirus-situation.

Markus Lüpertz, born 1941, is regarded as one of the most important German contemporary artists. His oeuvre is mainly associated with Neo-Expressionism and is comprised of paintings, drawings and sculptures. He also writes poetry and is a dedicated Free Jazz piano player.

Lüpertz traveled to St. Moritz at the end of February specifically to attend the vernissage of his exhibition, presenting himself with a good sense of humor as the eccentric painter prince, as whom he is commonly stylized by the media. He is not wholly uninvolved in this
assessment, describing himself as a genius and impressing through his appearance. His black suit, high shirt collar, dapper white beard, hat, and cane with silver grip attract attention and transport you into another time. Namely the time of painter princes.

Searching For His Own Way

Lüpertz studied at the Werkkunstschule Krefeld before he went to the Art Academy in Düsseldorf, of which he later became headmaster. In 1961 he moved to Berlin as a freelance artist. Together with Georg Baselitz, A.R. Penck, and Jörg Immendorff, he decided to distance himself from the then-dominant American Pop Art and Abstract Expressionism movements, instead dedicating himself to a more emotional and representational form of painting. Full of art historical references, his primary subjects are (German) history, Greek mythology, and legends.

The artist is distinguished by his unconventional interpretations, with which he creates tension and drama. Lüpertz’s work, based on inner connectivity, is influenced by his cinematic perception. In 1962, he developed his “dithyrambic painting,” a name taken from Nietzsches Dionysian poetry, and which originated from classical mythology. This became fundamental to his aesthetic philosophy, in which the concept of pleasure, of celebration, the wildness, was united with his own passionate celebration of the process of painting, intoxication and realism, representation and abstraction.

Lüpertz highlights the painterly qualities of seemingly banal objects, such as planarity, volume, symmetry and structure. Thus developing his style of depicting common objects with great expressiveness but in mysterious darkness.

In the exhibition on view in St. Moritz, one of Lüpertz’s masterpieces, the monumental Die Vertreibung aus dem Serail, immediately attracts the viewer’s glance. The two-panel piece is inspired by Mozart’s Opera. Lüpertz tells the story that he started with the dithyramb, based on his examination of Greek mythology.

Five works from the 1990s are presented in the dark palette typical of this period. Vier Generationen, a work in which the darkness is loosened by chalky blue tones, invites the viewer to linger longer to lose oneself in discovery and interpretation. However, the younger works can also be marveled at. Here Lüpertz takes on the theme of Arcadia, a pastoral Greek utopia. In two paintings, Lüpertz engages with the poet and musician Orpheus. Orpheus and Eurydike and Der Tod des Orpheus, show statuary nudes that allure one’s gaze and, as with so many of Lüpertz’s works, resonate in one’s memory.

Translated from the original German