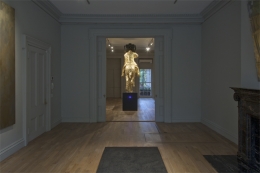 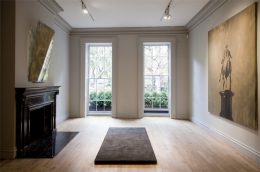 "Meditations" will be open to the public at the viewing spaces of Mark Fletcher and Vito Schnabel, art impresarios whose unconventional operations—each has a semi-private venue with irregular exhibition schedules, geographically independent from the city’s art gallery districts—echo the alternative nature of The Bruce High Quality Foundation’s practice. The exhibition is described by BHQF as “a meditation on the historical relationship between works of art and the consolidation and dispersion of political power.” Through the sculptures, painting, and video on view in "Meditations," the artists will use the visual language of antiquity to explore the ways objects have served as manifestations of power, and to investigate how preservation, historicizing, and collecting practices reveal and obscure other paths of influence and manipulation.

At Mark Fletcher’s space at 24 Washington Square North, BHQF will present "Meditations of the Emperor," a humanscale recreation of the Equestrian Statue of Marcus Aurelius, the ancient Roman bronze statue dating to 175 CE, known as the only fully preserved bronze statue of a pre-Christian Roman emperor. The original bronze, which depicts the philosopher king as a merciful conqueror, resides in Capitoline Museums of Rome. This ancient bronze is said to have served as the model for the Equestrian Statue of King George III of England that stood in New York City’s Bowling Green until 1776, when it was dismantled and converted into musket balls for use by George Washington’s army in battles of the American Revolutionary War.

At Mark Fletcher, the Foundation’s version of the Equestrian Statue will be rendered in high-density foam, plaster, burlap, gold leaf, two-channel video, and car speakers on a powder coated aluminum base. Televisions replace the heads of the emperor and his horse, broadcasting a video essay inspired by Marcus Aurelius “Meditations,” a collection of notes Aurelius wrote to himself, recapitulations of the Stoic philosophy by which he lived.

The artists’ video is a montage combining hundreds of found video clips and quotations tracing a course between formal figurations of power through the ages, and a young woman’s monologue about her everyday confrontations with powers beyond her control. The sculpture and video will be accompanied by a large-scale painting depicting the ass of Aurelius’ horse.

According to BHQF, "Meditations of the Emperor" explores “the desire of those in power to be simultaneously loved and feared, and the empathic fantasy of talking to animals."