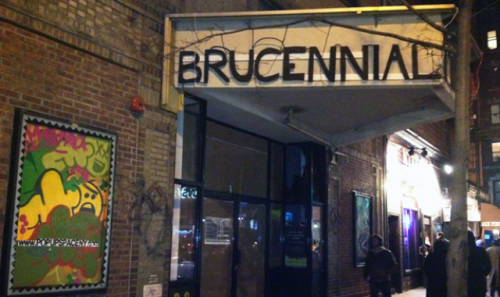 The much-loved Brucennial is returning for 2012, this time downtown at 159 Bleecker Street. A sort-of-every-two-years showing of not-quite-eminent works of art, this downtown alternative exhibition is set once again to coincide with the Whitney Biennial, throwing open its doors at 6pm on February 29. Coordinated by the Bruce High Quality Foundation, the well-known art collective which focuses on a genial form of institutional critique, the Brucennial has managed to attract quite an audience for its lovably DIY spirit.

We see something similar in the provisional list of the 2012 participants glimpsed by ARTINFO. Between the names of a variety of under-employed artists and gallery interns, there are figures like Cindy Sherman, Richard Prince, and even Jean-Michel Basquiat. There’s even supposed participation by one Damien Hirst — though the curators haven’t denied that this might be a wisecrack about the British artist’s hyper-exposure (see below).

In addition, the Bruces are advertising a musical to accompany this year’s show, titled “Animal Farm,” which appears to be a kind of satirical reflection on their own experimental free art school: "In 2012, The Bruce High Quality Foundation University (BHQFU) is in crisis. Faced with overwhelming debts, the Chicken Trustees of the school may be forced to compromise its 150 year legacy and do the unthinkable: charge tuition. Luckily, the graduating Piggy Artists of the class of 2012 have something else in mind."
The Bruces, or someone from the Bruces at least, was nice enough to respond to some questions by email about the upcoming event. Enjoy!What's the process of putting this together? How long has it been in the works?
It's essentially an elaborate word of mouth process. When we first started putting the show on, we asked our friends. And then they asked their friends. And now six years later, we have a lot of friends.

We started planning it a couple of months ago. The installation itself happens in just a couple days thanks to the effort of the army of artists in the show.

Is there anything different about this edition than the last time around? Does the fact that this time the Bruces aren't in the concurrent Biennial change anything?

We started doing this show before we were in the Biennial, so we saw no reason to stop now. There isn't anything significantly different about the format this time around. Except there is more. More artists. More work. And it seems like participants have really stepped up their efforts thanks to the attention the 2010 edition received.

And then there's "Animal Farm." Right in the middle of the space we're putting on a musical. It's a fable about arts education, about BHQFU, the free art school we're re-opening this fall, and Cooper Union, the free art school that is currently considering charging tuition.

As an alternative biennial yourself, do you have any take on the Occupy Wall Street agitation around the Biennial this time?

What's the logic behind the mixture of famous names and all the rest in the show?

Artists are artists. The young ones, the old ones, live ones and dead ones. And we're invested in forging a community among all of them.

Damien Hirst? Really?
Sure enough. If anyone is attempting the round the world trip to see all the spot shows, there's another location to add to the list.
View More